Friday (June 15, 2018), joined by representatives from industry and government, Seaspan Shipyards (Seaspan) celebrated the start of construction on the first Joint Support Ship (JSS) for the Royal Canadian Navy (RCN). 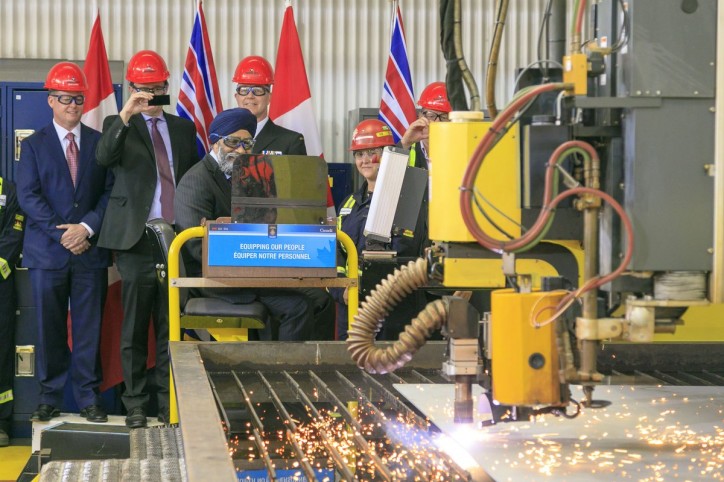 The steel cutting ceremony held at Vancouver Shipyards is a significant milestone for Seaspan, the National Shipbuilding Strategy (NSS) and Canada’s shipbuilding industry. With the start of construction on JSS, Seaspan is leading the way in rebuilding Canada’s shipbuilding industry. In addition, start of construction ensures that Seaspan will see the continued growth of Vancouver Shipyards’ workforce while mitigating any possible downturn in production.

“Today’s start of construction ceremony is important not only for our company and customer, but also for Canada’s shipbuilding industry and the thousands of hardworking women and men it employs,” said Brian Carter, President & CEO of Seaspan Shipyards. “Cutting steel on the first Joint Support Ship for the Royal Canadian Navy is yet another demonstration of how shipbuilding is back in Canada and our company is proud to be leading the way.”

With the start of construction on JSS, Seaspan will ensure that continuous production is realized on its work as Canada’s non-combat shipbuilder. At its peak, work on JSS will contribute towards sustaining an estimated 1,000 jobs for tradespeople and approximately 300 office staff at Vancouver Shipyards. In addition, Seaspan’s work on JSS will leverage its broader Canadian supply chain and support the continued growth of Canada’s shipbuilding and marine industries.

At over 173 metres in length and with a design displacement of nearly 20,000 tonnes, JSS will be among the largest ships built on Canada’s West Coast once complete. JSS will support the RCN’s work at home and abroad for both defence and humanitarian missions. These ships will deliver fuel and other vital supplies to vessels at sea, offer modern medical and dental facilities, and providing support for helicopter operations and equipment repair. To be built to the highest standard and with modern equipment, propulsion redundancy, a 30+ year life expectancy and the ability to stand in harm’s way if required, JSS represents a complete solution to the operational needs of Canada’s Navy.

“As a Canadian company in business for more than 40 years and an employer on the West Coast, we are a proud participant in Canada’s National Shipbuilding Strategy,” said Jim Longo, Founder & President of Ideal Welders. “With our work for Seaspan, our company is realizing growth: we have increased our workforce by thirty per cent, invested in training, purchased productivity increasing equipment, and doubled the size of our facilities so that we can respond to the needs of a modern shipbuilding industry. We are excited to be part of this next phase in the National Shipbuilding Strategy.”

Canada’s shipbuilding industry has been rebuilt thanks to the NSS and it is delivering on the promise of ships built in Canada by Canadians. To date, Seaspan has $600M in committed contracts and engaged approximately 500 Canadian firms thanks to its NSS-related work alone. Construction on JSS will contribute to the continued growth of Canada’s shipbuilding and marine industry.