Capable of generating five megawatts of power, the maritime turbine was constructed in the port of Arinaga and its final destination is the Jinámar coast, next to the Oceanic Platform of the Canary Islands (Plocan), situated between Las Palmas and Telde

The structure is 115 metres tall – twice the height of the Maspalomas lighthouse – and its three blades measure 64.4 metres each

Boluda Towage and Salvage’s tugboat the VB MEDITERRANEO took part this week in the complex towage of Spain’s first marine wind turbine from the southeast dock of Arinaga port in Agüimes, Gran Canaria, to the coast of Jinámar. The new wind energy project has a total budget of 20,675,676 euros, 13,679,848 euros funded by the European Union through its Horizon 2020 program. 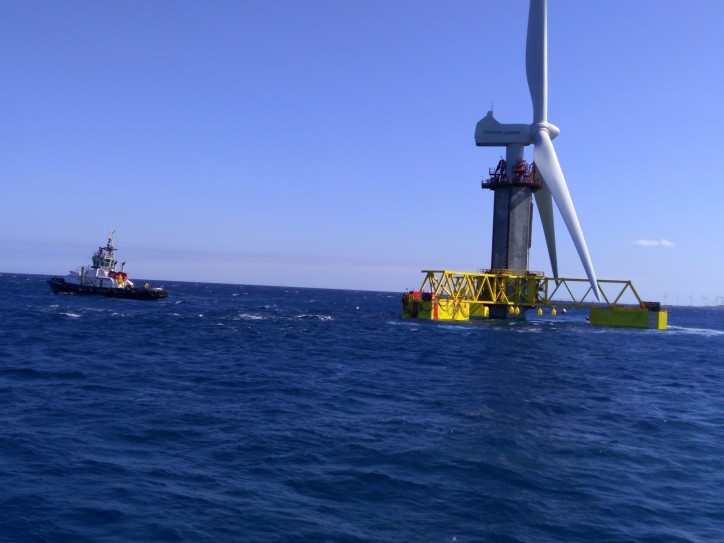 On Wednesday 20 June towing began of the five-megawatt maritime turbine built over the last few years in the port of Arinaga, from the Southeast dock to its definitive location on the coast of Jinámar, next to the Oceanic Platform of the Canary Islands (Plocan) and near the Piedra Santa water treatment plant, between Las Palmas de Gran Canaria and Telde.

The turbine’s immense dimensions result in a complex operation: its blades are 64.5 meters long, making manoeuvrability difficult and requiring very low speeds to guarantee the stability of the structure during the journey.

The fleet maintained speeds of one or two knots during the voyage from Arinaga. The second phase of the wind turbine installation process is due to start on arrival at the Plocan test field. The floating concrete platform will be anchored to the seabed by filling it gradually with water, following Archimedes’ principle.

Meanwhile, the platform tower, a concrete structure made from large semi-cylindrical pieces, self-erects to reach a height of 115 metres – twice as high as Maspalomas Lighthouse – and will become a new landmark at the entrance of the capital city. The energy produced will reach the Jinámar power plant through a system of underwater cables installed in the area at the end of 2017. 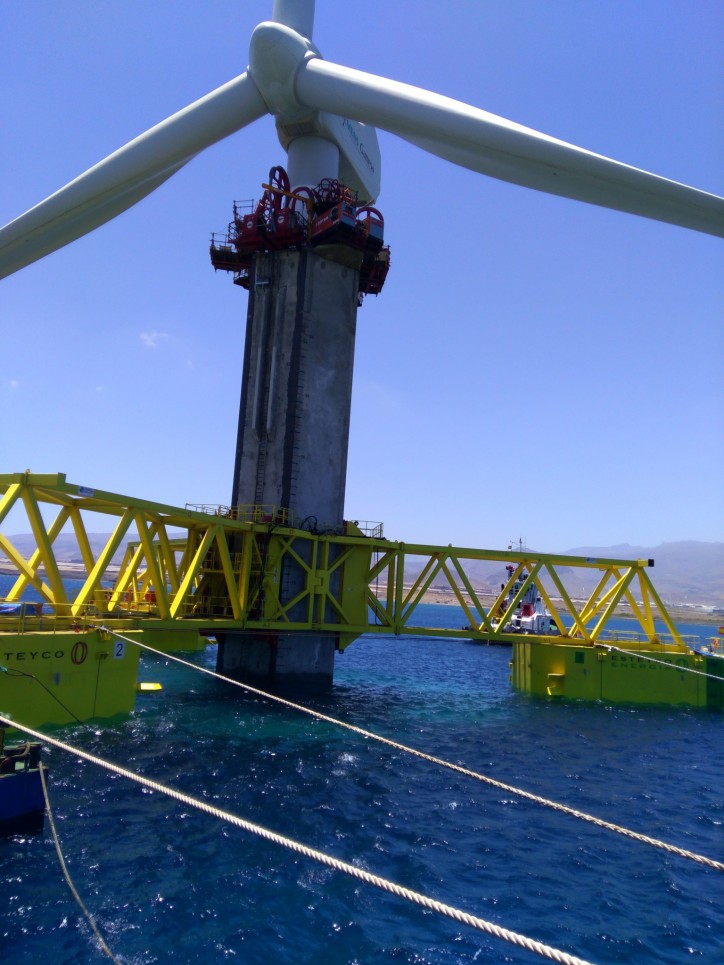 The marine wind turbine aims to transform the global market in this sector thanks to its novel construction and mobile transfer procedure. According to the designers, consulting company Esteyco, this method of assembling the structures in existing shallow docks and transporting them using traditional vessels will reduce costs by up to 35%.

Up to now, the 3,000 marine wind turbines in use worldwide, mostly situated in the North Sea, have been installed offshore using vessels equipped with jack-up marine cranes, which have particularly high daily charter costs.