F-35C Joint Strike Fighters are conducting first flight ops aboard an aircraft carrier ever as part of their Operational Test-1 (OT-1) on the USS Abraham Lincoln (CVN 72).

OT-1 evaluates the full spectrum of the F-35C’s suitability for operation within a carrier air wing and mission effectiveness to the maximum extent possible. 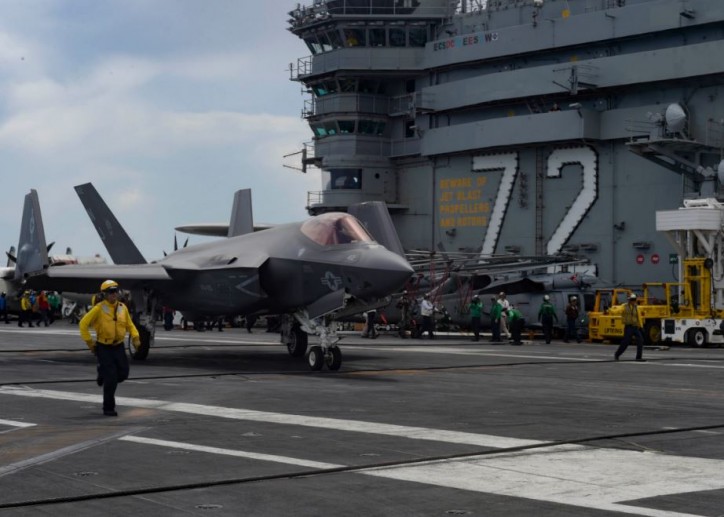 Evaluators have been assessing the suitability of the F-35C aboard carriers by defining how well it performs with other aircraft and incorporates into an air plan, monitoring maintenance and identifying its logistics footprint.

“We hope to see how it integrates onboard the ship,” said Rear Adm. Dale Horan, director, Joint Strike Fighter Fleet Integration Office. “Can we maintain it? Can we get the parts? Can we get it airborne? Can we repair it if it has a problem? Those are the kinds of things [we are looking for].”

In addition to assessing the suitability of the F-35C on a Nimitz-class class aircraft carrier, OT-1 evaluators observed the effectiveness of the F-35C in real-world scenarios.

“The effectiveness piece is what we’re doing when we’re airborne and executing missions,” said Capt. Matt Norris, from the Joint Strike Fighter Operational Test Team. “We’ve been integrating with the strike group and accomplishing many missions like defensive counter air and anti-submarine warfare, for instance.”

Film crews were shooting footage of air operations aboard CVN 72 for the sequel to the 1986 blockbuster Top Gun at the same time as OT-1 was taking place which means the F-35C are likely to be featured in Top Gun: Maverick.

Previously, F-35C and F/A-18 Super Hornet pilots have only conducted carrier qualifications together, so OT-1 marks the first time the F-35Cs have joined a carrier air wing to perform in a cyclic operations environment.

During cyclic operations, aircraft simulate missions, practice aerial maneuvers and take off and land continuously with brief pauses to allow for maintenance, fuel and ordnance changes.

Aboard Abraham Lincoln, the F-35C has been flying cyclic operations with F/A-18 Super Hornets, E-2D Hawkeyes and EA-18G Growlers, conducting missions it would execute in combat if required. The addition of the F-35C brings advanced capabilities that transform the way an air wing conducts operations.

Operational Test-1 helps give the Navy an assessment of how the aircraft would perform on deployment. As adversaries advance and legacy aircraft age, the F-35C is critical to maintaining air dominance.

And while pilots adapted to the new aircraft, the crew of Abraham Lincoln also adjusted to the F-35s. From Aviation Boatswain’s Mates to Air-traffic Controllers, each Sailor learned to manage the aircraft with its unique attributes and capabilities.

“The level of planning that is required to execute an evolution like we did for OT-1 is huge, so everyone aboard Abraham Lincoln should be proud of the level of effort that they put in and how well they executed,” said Norris. “We can’t fly this aircraft without everything the ship does for us, and the Lincoln has been an impressive ship.”

With the successful completion of OT-1, the fifth-generation aircraft is one step closer to becoming deployable in the Navy fleet.

“The aircraft looks like a naval aircraft on the flight deck. From that perspective, the big picture looks pretty good,” said Horan.