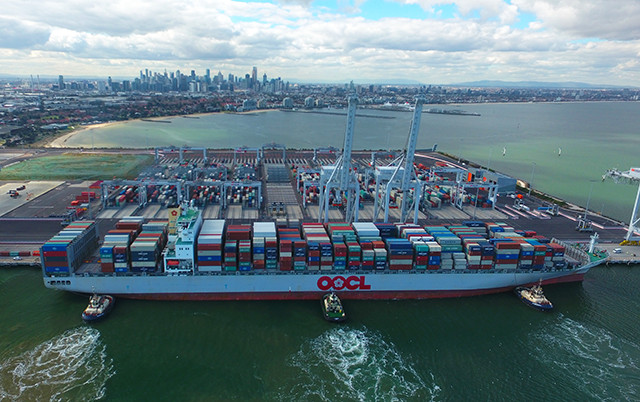 The OOCL Seoul, featuring a LOA of 322.97 meters and beam of 42.8 meters, operates in the central China - Australia East Coast service jointly operated with COSCO and ANL, that has recently been the subject of a capacity boost via the introduction of vessels with capacities in the range 8063 to 8500TEU, LOA from 320 meters to  335 meters and beams in the range 42.8 meters to 45.6 meters.

VICT, as planned by the Port of Melbourne Corp. and developed by International Container Terminal Services Inc. (ICTSI), parent of VICT, is a highly automated terminal designed to meet the requirement for new capacity in Melbourne, but more importantly to provide an efficient solution to catering for the larger vessel types now being progressively introduced into Australian container trade lanes. Vessels of a similar size and specification to the OOCL Seoul are expected to become an increasingly familiar sight at VICT which is able to accept larger vessels than other container handling facilities active in the port.

Approximately 3400 containers were handled during the call, with crane productivity at around 70 moves an hour.