“We’re preparing to redefine the Port of Savannah as not simply the load center for the Southeastern U.S., but as the port of choice for major inland markets east of the Mississippi River,” Lynch said.

During his presentation to nearly 1,400 people, including Gov. Deal, Georgia House Speaker David Ralston, Congressman Buddy Carter, other elected officials and business leaders from across the state and nation, Lynch detailed projects that include the Mason Mega Rail facility, which will double the Port of Savannah’s rail capacity to 1 million lifts per year by 2020; new equipment purchases including eight additional ship-to-shore cranes and 64 additional rubber-tired gantry cranes; gate and container storage expansions, berth improvements and off terminal road additions.

“Almost eight years ago, Gov. Nathan Deal established a goal to make Georgia the best state in the nation to do business by providing state government, business leaders and our ports what they needed to make that happen,” said GPA Board Chairman Jimmy Allgood.

He noted that since Governor Deal took office in 2011, the Port of Savannah has grown by 45 percent or an additional 1.2 million TEUs; the harbor deepening project has been approved and is now 50 percent complete; and, state transportation improvements like the Jimmy Deloach Parkway ensure that cargo moves more efficiently and without delay. 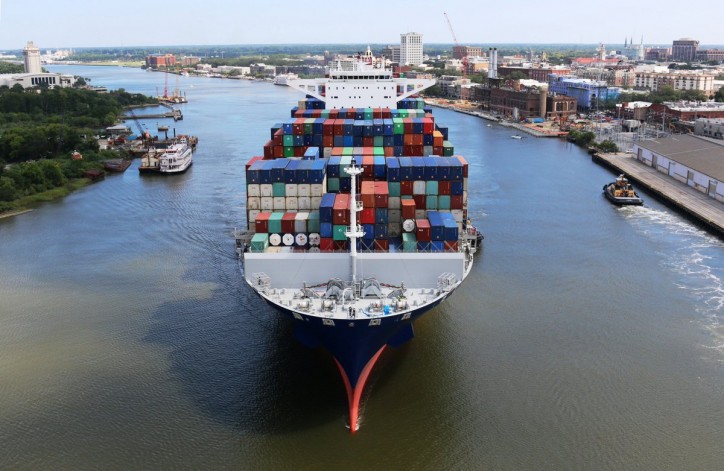 Lynch expressed thanks for the leadership provided by state and local economic development authorities for helping to land 29 port-related projects in Fiscal Year 2018, bringing more than $1 billion in investment and 4,741 jobs to Georgia.

“Industries are drawn to Georgia by its growing population, economic energy and its superior connectivity to important centers of production and commerce,” Deal said. “Companies that ship through Georgia’s ports benefit from superior road and rail infrastructure, and more global container services than any other port on the U.S. East Coast.”

Over the past year, Lynch said, the Savannah market has seen record private investment in industrial real estate. In FY2018, developers added more than 6 million square feet of industrial space, according to Collier’s

International. The area’s vacancy rate was still only one half of one percent by the end of the year. Strong market demand has resulted in an unprecedented 9.75 million square feet currently under construction.

Work on the Savannah Harbor Expansion Project (SHEP) is expected to be finished in late 2021. “Thanks to Governor Deal’s leadership, U.S. Senator Isakson and Perdue, Congressman Buddy Carter and the entire Georgia delegation, the construction project is fully funded this year,” said Lynch.

A U.S. Army Corps of Engineers study estimates the deepening’s net benefit in transportation savings for shippers and consumers at $282 million per year. The expected total savings to the nation over the course of 50 years is $14.1 billion. For every dollar spent on construction, the project will return 7.3 dollars to the nation’s economy through savings on cargo transportation – one of the largest returns on investment on a navigation project for taxpayers in the country.

As deeper water allows larger vessels to call on the Port of Savannah, the GPA, along with its state partners, will be examining future infrastructure requirements, including air draft capacity of the Talmadge Bridge. Although no such vessels currently call on the US East Coast, the port could handle some vessels up to 19,000 TEU capacity.

“At the GPA, we are not only focused on expanding capacity on and off our terminals, but we are committed to finding, training and retaining the next generation of port professionals,” Lynch said.

Lynch unveiled GPA’s new workforce development initiative, the Youth learning Equipment and Safety program, or YES, created to hire and train high school graduates for careers in the port industry. The new hires will shadow experienced workers and learn forklift, truck and container equipment operations. The first six employees hired through the program were referred to GPA by school administrators after taking classes and expressing interest in a logistics career.

“Through our YES program, we are hiring promising young people who are ready to get to work,” Lynch said. “In today’s market, we have to do more than search for qualified applicants – we have to be willing to train the workers we need. Maintaining a well-qualified workforce is critical to remaining competitive.”

Allgood said the enhanced employee training policy places the GPA in a leadership role among the nation’s ports. “At Georgia Ports, we’re setting the right example by creating opportunities for young people to enter a career that will allow them to support themselves and their families over the long term,” Allgood said.

“The young people joining GPA today will be able to learn from the best in the business as they find their niche within our operation,” said Lise Altman, GPA’s Senior Director of Human Resources. “We hope to increase the number of high school graduates hired through the YES program next year. Those who are interested in taking part should reach out to their school administrators for more information.”

See a summary of Executive Director Griff Lynch’s presentation at www.gaports.com/stateoftheport. Find print-quality images of port operations here. Georgia’s deepwater ports and inland barge terminals support more than 439,000 jobs throughout the state annually and contribute $25 billion in income, $106 billion in revenue and $2.9 billion in state and local taxes to Georgia’s economy. The Port of Savannah handled 8.5 percent of U.S. containerized cargo volume and 10 percent of all U.S. containerized exports in FY2017.