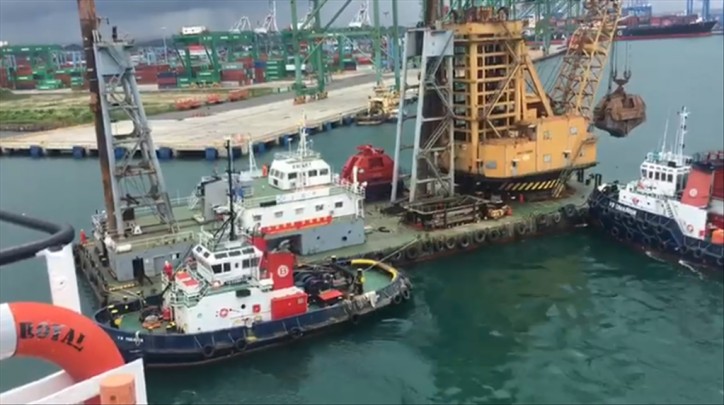 The new port facilities will include a container terminal with a throughput capacity of 2.5 million TEUs

As towing service providers for Chinese company SDC Panamá Construction SA – subcontracted by China Communications Construction Company (CCCC) – Boluda Corporación Marítima’s tugboat division Boluda Towage and Salvage has begun collaborating in the construction of a megaport in the Atlantic, on Isla Margarita (Panama). Under the commercial name “Panama Colón Container Port” (PCCP) this terminal will have an annual throughput capacity of 2.5 million TEUs, and an investment of 500 million dollars.

The developer of the macro terminal Chinese Landbridge Group has recently started construction of this new infrastructure on Isla Margarita in the province of Colón (Panama). Landbridge Group, one of the most important Chinese-owned private companies, has chosen Panama as the Latin American hub to implement its investment plan in the region.

As part of Boluda Towage and Salvage’s long-term chartering contract with SDC Panama Construction SA, the VB CIMARRON and VB TERRIER tugboats tow the HB-2 pontoon to the dumping area with the material loaded by the EAGLET dredger.

Both these tugs have therefore been used at the start of the mega terminal construction to replace the EAGLET dredger bucket with a new one, brought by the INDUSTRIAL ROYAL to the port of Balboa, where the unloading was coordinated. To do this, both tugs moved the grab dredger to the side of the vessel for boarding to unload the bucket. Subsequently both tugs unmoored the EAGLET dredger from the INDUSTRIAL ROYAL vessel, towing it to and mooring it in the CCT dock.

SDC Panama Construction SA entrusted Boluda Towage and Salvage with this operation due to their wealth of experience in these kind of operations. The work required not only carrying out manoeuvres in an area with heavy traffic and many anchored vessels, but also demanded perfect coordination and exact timing on the part of the company’s operations department; from the INDUSTRIAL ROYAL’s arrival at the port of Balboa to its departure for the Caribbean, only few hours were available to carry out the manoeuvre without causing delays.

This project will contribute to the country’s development, especially in the province of Colon, where it is estimated about 800 direct jobs will be created during the construction phase, and 1,200 once operations begin. The first phase of the project involves construction of the docks and the container berth, and dredging and filling in work. In its two phases the project amounts to an investment of around 1.1 billion dollars.

The construction work is being undertaken by the China Communications Construction Company (CCCC), one of the largest port design and construction companies in China and the second largest dredging company in the world, as well as the world’s largest manufacturer of container cranes.