Seaspan Shipyards (Seaspan) has awarded Jastram Engineering Ltd. (Jastram) of North Vancouver, British Columbia, a contract valued at more than $3.7M for work on Canada’s new Joint Support Ships (JSS). Jastram represents one of more than 390 BC-based suppliers that Seaspan is working with to meet its commitments under the National Shipbuilding Strategy (NSS) and the Industrial and Technological Benefits Policy. 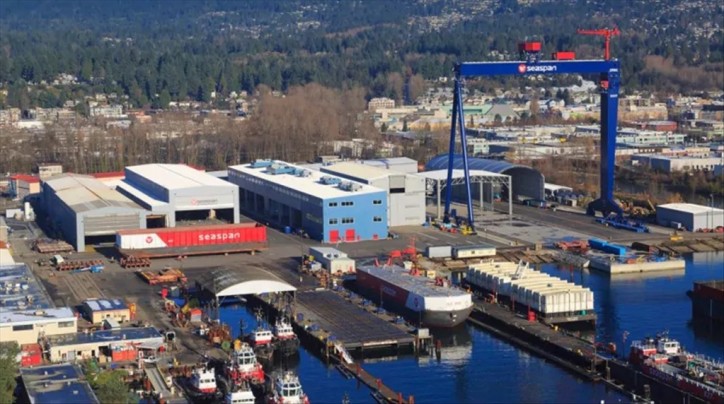 Jastram is supplying a turn-key maneuvering system for JSS. This system includes a complete rudder assembly, steering system, and all interfaces required for a seamless integration. The company will also be supplying all the installation support and training, as well as the required maintenance and logistics documentation. Jastram has an established relationship with Seaspan thanks to its work under the NSS on the Offshore Fisheries Science Vessels (OFSV), the first of which was launched late last year. By building these ships for the Canadian Coast Guard (CCG) and Royal Canadian Navy (RCN) in Canada, Seaspan is helping to re-establish a Canadian supply chain.

Thanks to its work under the NSS, Seaspan has developed nearly $650M in committed contracts with approximately 520 Canadian companies. As the company continues to make progress on its NSS commitments, this supply chain is expected to grow as more Canadian companies realize new opportunities with a revitalized shipbuilding industry. It is through its work on the NSS that Seaspan is directly and indirectly helping to employ thousands of Canadians from coast to coast to coast.

“The National Shipbuilding Strategy is forging long-term partnerships between shipyards and Canadian businesses, integrating world-class Canadian technologies on Canadian ships. Seaspan’s latest contract with Jastram is a good example of how the Strategy is supporting the growth of Canada’s marine industry, creating highly-skilled jobs and boosting our economy.” – The Honourable Navdeep Bains, Minister of Industry, Science, and Economic Development

“This contract for a maneuvering system for Canada’s new Joint Support Ships is another example of a homegrown Canadian company benefitting from our government’s National Shipbuilding Strategy. This Strategy is helping the Royal Canadian Navy and the Canadian Coast Guard get the ships they need, while also providing strong economic benefits for Canada.” – The Honourable Carla Qualtrough, Minister of Public Services and Procurement and Accessibility

“Thanks to its work under the National Shipbuilding Strategy (NSS), Seaspan Shipyards is developing a Canadian supply chain that can respond to the needs of our domestic shipbuilding industry. With this supply chain development, the NSS is encouraging investment by Canadian companies, supporting the development of export opportunities, and creating highly-skilled, middle class jobs across Canada. Our continued relationship with Jastram Engineering is an important one and their involvement in the NSS demonstrates the local impact of Canada’s shipbuilding program.” – Mark Lamarre, Chief Executive Officer, Seaspan Shipyards

“On behalf of Jastram Engineering I am pleased to announce that Seaspan has awarded our firm a contract to deliver the maneuvering system for the Royal Canadian Navy’s new JSS presently under construction at Seaspan’s Vancouver Shipyards. We value our ongoing relationship with Seaspan and see this as a further vote of confidence in Jastram’s ability to deliver critical equipment for the next phase of the NSS. As a 100% Canadian company with its design and production facilities located in North Vancouver, Jastram has been serving the local industry since its inception, and is a proud supplier of the Canadian Coast Guard and the Royal Canadian Navy.” – Warwick Green, President, Jastram Engineering Ltd.