Waterside construction at Port Canaveral’s new state-of-the-art Cruise Terminal 3 is underway and a new 1,309-foot-long berth is about to take shape with the arrival of the first steel for the bulkhead wall.

Intermarine LLC’s Ocean Globe, a 545-foot multi-purpose U.S.-flagged vessel, arrived at the Port this week to discharge 261 steel pipes ranging in length from 110.5 feet to 126 feet. The 36-inch diameter pipe piles will be part of an A-frame structure under construction at the berth that will anchor to the waterfront bulkhead wall.

“The initial delivery of steel ‘A’ frame components on the jobsite is a critical milestone in the progress of building the marine facility for the new CT-3,” stated Bill Crowe, Vice President, Engineering, Construction and Facilities.  “The project team at Port Canaveral, including the contractor RUSH Marine, is increasingly excited for the completion of our new landmark cruise terminal for Carnival Corporation.” 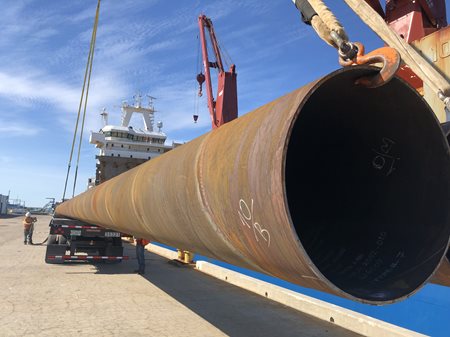 Waterside construction of the new berth got underway in September, beginning with the demolition of existing pier structures at the site and installation of protective barriers to prevent erosion resulting from wake and wave action generated by vessels transiting the Port’s main channel.

In a first for the Port, a lightweight aggregate will be used in construction as backfill to reduce long-term settlement of the berth.  As a result, it reduces load on the bulkhead wall, allowing a reduction in the size of the steel and substantially decreasing construction costs.  The aggregate material is manufactured from various clays produced by a rotary kiln process.

The completed CT-3 terminal, related landside structures, and roadway improvements will be the Port’s largest single capital project in its 65-year history. The $150 million project will be completed in time for the June 2020 arrival of Carnival’s as-yet-unnamed 180,000-ton “XL Class” vessel.

The marine works is expected to be completed by end of November 2019. Two passenger boarding bridges for the terminal are currently in the design/build process. Terminal and parking garage construction is expected to start in January 2019 and be completed in April 2020.

Carnival Cruise Line’s newest and largest vessel will have capacity for up to 6,500 cruise guests and a crew of about 2,000.  The vessel will be the first North America-based cruise ship powered by liquified natural gas (LNG), the world’s cleanest-burning fossil fuel. The vessel’s scheduled arrival at Port Canaveral in mid-to-late 2020 will mark the 30-year anniversary of Carnival offering cruises from the Port.

The new terminal is being built on the site of the old Cruise Terminal 3, which was demolished earlier this year. The terminal will feature a futuristic design inspired by nearby Kennedy Space Center. Its planned technological features include modernized systems to facilitate U.S. Customs and Border Protection screenings of arriving passengers, and integrated mobile passenger check-in to expedite the boarding process. The facility will support an estimated 4,000 permanent jobs in combination with the Port’s overall modernization and improvement plans.

Source: Port Canaveral (More information about the port at CruiseMapper)