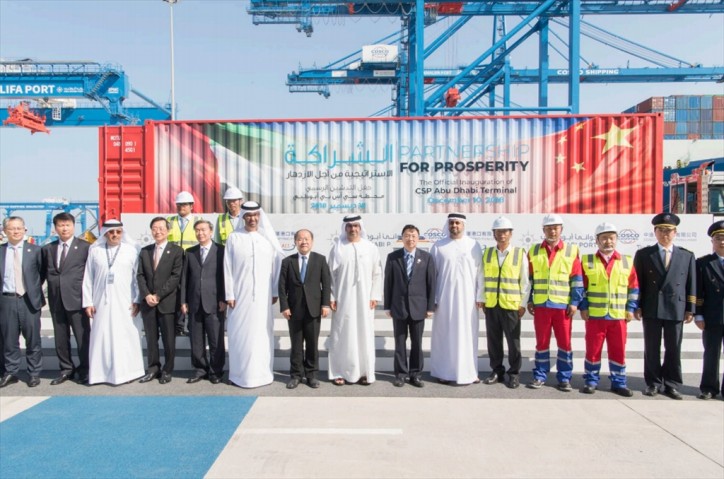 CSP Abu Dhabi Terminal is the first international green-field subsidiary of COSCO SHIPPING Ports; water depth of the semi-automatic terminal is 16.5 metres which allow it to accommodate megavessels typically in excess of 20,000 TEU. With an annual design capacity of 2.5 million TEU, the terminal will begin trial operations in April 2019 with 1.5 million TEU handling capacity, and will gradually ramping up the volume until the official operations scheduled to commence in the third quarter of 2019.

Total capex made by CSP in the terminal was US$300 million, which includes the largest Container Freight Station (CFS) in the Middle East covering 275,000 square meters. This state-of-the-art facility is the first of its kind in the region to be semi-automated with facilities for full and partial bonded container shipments, the full range of container packing services, short-term warehousing for de-consolidated cargo as well as easy connectivity with container terminals in Khalifa Port. 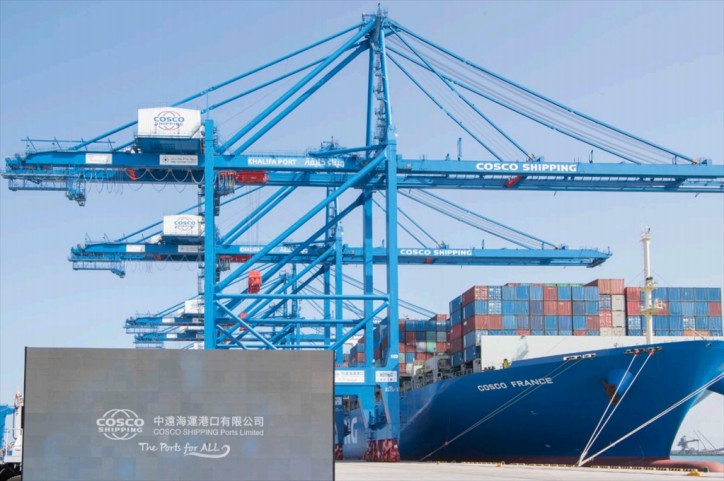 His Excellency Ning Jizhe, Deputy Director of NDRC, expressed his view that, “The inauguration ceremony is not only a milestone in the cooperation of China’s 'Belt and Road Initiative', but also a good start for China and UAE’s pragmatic cooperation in other key areas. The two countries’ strong determination for cooperation laid a solid foundation for development and deepening of mutual relations, and thus provided promising prospects for cooperation in the future. Under the strategic leadership, China and UAE will continue to cooperate and jointly contribute to “Belt and Road Initiative”.”

His Excellency He Jianzhong, Deputy Ministry of Ministry of Transport of the PRC, said, “CSP Abu Dhabi Terminal is the latest major achievement from China and UAE’s joint efforts to implement 'the 21st Century Maritime Silk Road' in ports and shipping industry. CSP and Abu Dhabi Ports will continue to cooperate and increase capacity of Abu Dhabi Khalifa Port to make it a container gateway port and an important hub port in the Middle East in the near future, with an aim to better serve trade and economic development, as well as local community and people.”

Captain Xu Lirong, Chairman of COSCO Shipping, said: "The completion of CSP Abu Dhabi Terminal is just another milestone in the successful partnership between China and Abu Dhabi, and it will prove to be a fruitful cooperation between the two Countries. Port business is one of the important parts of COSCO Shipping; we will support the development of the terminal to the fullest extent of our capability by developing shipping routes and transshipment network to drive the volume growth of CSP Abu Dhabi Terminal. The terminal is set to be a pivot for us to develop a global maritime hub for international transshipment and logistics."

Mr. Zhang Wei, Vice Chairman and Managing Director of CSP, said: “We are launching this semiautomatic terminal to serve vessels of all sizes and to help ensure a promising future for this region. CSP Abu Dhabi terminal will be equipped with value-added services such as feeder service network and easy connectivity with container terminals in Khalifa Port. It’s our broader strategy to develop Abu Dhaibi as a regional logistics and trade hub and link it with industrial free zones to expand and diversify the economy. Backed by our parent company, we will harness our unparalleled strengths to turn Abu Dhabi into a regional hub and a competitive shipping service center."

His Excellency Dr Sultan Al Jaber, the UAE Minister of State and Chairman of Abu Dhabi Ports, said: “This inauguration is yet another example of the long history of economic cooperation between China and the UAE. The expansion of Khalifa Port in partnership with CSP will further 3 enhance the UAE’s role as an important trading link between East and West, promote our country’s economic diversification and contribute to the global connectivity of China’s Belt and Road Initiative.”

Captain Mohamed Juma Al Shamisi, CEO of Abu Dhabi Ports said: “CSP Abu Dhabi Terminal connects Khalifa Port to COSCO Shipping’s global network, making it not only one of the largest ports across the Middle East and Indian subcontinent, but a global maritime hub. Abu Dhabi's strategic location as a gateway to the MENA region makes it an important partner for China's Belt and Road Initiative, connecting Asia with Africa and Europe via land and maritime networks along six corridors.”

The new terminal will also ease the way for companies seeking to establish, expand or enhance their trade by using local manufacturing, warehousing or logistics operations within Abu Dhabi and, through them, service regional, Middle Eastern, African and international markets. In addition to attracting investors from Eastern Asia, it will increase Khalifa Port’s competitiveness and act as a catalyst for investment by foreign companies to set up in the free zone of Khalifa Industrial Zone Abu Dhabi (KIZAD), the region's largest industrial, manufacturing and logistics hub and free zone. KIZAD, which comprises 410 square kilometres, has to date attracted more than 200 tenants and AED 65 billion (US$17.7 billion) in investment. So far, a total of 19 Chinese companies have signed lease agreements for land in the demonstration zone established within the Khalifa Port Free Trade Zone in August 2017 by the Chinese Jiangsu Provincial Overseas Cooperation and Investment Company (JOCIC).