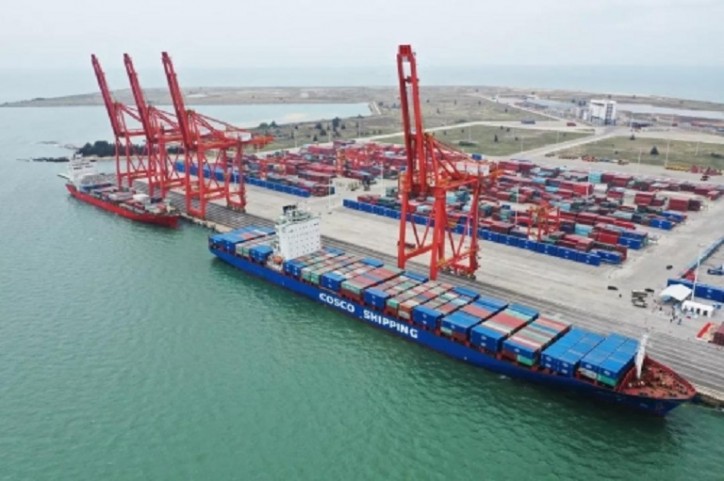 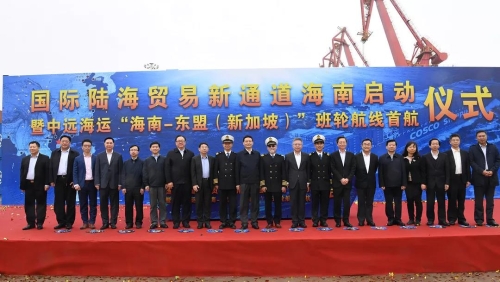 The “Hainan-ASEAN (Singapore)” Liner Route opens a direct passage through which goods from China’s western regions can be shipped southward to Singapore via Yangpu Port, as well as a new channel for transferring cargo from China’s coastal ports to Southeast Asia via Yangpu. It declares that Yangpu Port in Hainan has turned to a new pivot of ILSTC and marks that ILSTC, which takes Qingzhou in Guangxi Province as its gateway and Yangpu in Hainan Province as its international hub, has entered a new stage of development.

Mr. Wang Lu, Vice Governor of Hainan Provincial People’s Government: The opening of the container route from Yangpu to Singapore will bolster the confidence of international and Chinese shipping companies in expanding the Hainan shipping market while injecting vitality into the involvement of Hainan into ILSTC construction. In the future, Hainan will accelerate the improvement of port infrastructure and addition of new container routes and make full use of the preferential policies as a free trade port, to build an important gateway to the Pacific and Indian Oceans.

Mr. Huang Xiaowen, Executive Vice President of COSCO SHIPPING: “COSCO SHIPPING has taken an active part in ILSTC construction and developed key nodes in Chongqing, Chengdu and Guangxi. Next, the Corporation will increase investment in route construction. With a focus on Yangpu, we will continue to improve route services from Hainan to ASEAN countries, and enhance the connections between Yangpu with Qingzhou and coastal routes. We will also give full play to the role of the Hainan free trade port, an integrated service hub of the international supply chain, in key nodes of the Belt and Road to promote connectivity and make new ground in opening China further through links running eastward and westward, across land and over sea at an earlier date.”

Mr. Chen Zhen, Deputy Head of Haikou Customs and Head of the Customs of Yangpu Economic Development Zone: “According to the overall plan for establishing Hainan as a pilot free trade zone, Haikou Customs will pilot the entry and exit management system of “easing control on the first line (border line)” and “having effective and efficient control on the second line (line between free trade zones and other areas)” at Yangpu when appropriate. We will also innovate our port supervision model, deepen the national customs clearance integration reform and streamline customs clearance procedures to enhance efficiency and optimize services.”

Under the framework of the Belt and Road Initiative, ILSTC connects the Silk Road Economic Belt in the north with the 21st Century Maritime Silk Road and the Indo-China Peninsula in the south. With relevant provinces, autonomous regions and municipalities in western China, including Guangxi, Yunnan, Guizhou, Sichuan, Chongqing, Gansu, Qinghai, Xinjiang and Shaanxi, as key nodes, and through rail, sea and highway transportation, it provides access to major ASEAN countries such as Singapore and further extends to Australia, New Zealand, the Middle East and Europe. In addition, it is linked to Northeast Asia and North America in the east and to China Railway Express in Chongqing, Lanzhou and Xinjiang in the north. As an integrated access to the outside world, ILSTC enables the western regions to cooperate with ASEAN and other countries and connect to the Belt and Road.

COSCO SHIPPING has provided strong support for ILSTC construction. Over the past year, it has added ocean-going routes with Qingzhou Port in Guangxi as the port of departure or port of call to boost the opening-up of hinterland areas. In the meanwhile, it has developed key ILSTC nodes in Chongqing, Chengdu and Guangxi, stepped up construction of port and logistics infrastructure to promote rail-sea intermodal transport. In the future, the Corporation will improve and increase routes from Qingzhou and Yangpu to Southeast Asia and South Asia, open routes for transshipping goods from Singapore to large vessels on major routes, so as to cover routes to Australia, Singapore, Europe, the Mediterranean and the Black Sea, Africa, the Persian Gulf and the Red Sea. It has also established a service network spread over Southeast Asia, North America and Central and South America to help with the building of Hainan into a free trade pilot zone and a free trade port with Chinese characteristics, and to bring the central and western regions more fully into international trade. 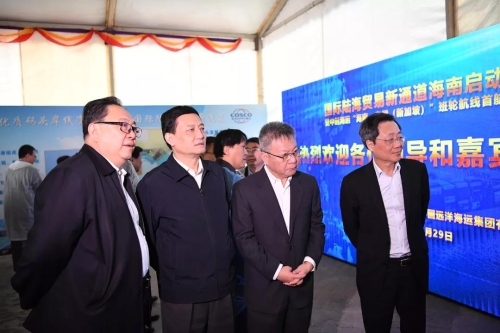 Before the inaugural ceremony, accompanied by Capt. Xu Lirong, Xiao Yaqing, Shen Xiaoming and Wang Lu watched a display board introducing the connection of Yangpu Port to ILSTC. After the ceremony, they boarded M.V. Xin Fang Cheng and greeted its crew.