Seventy-Six Incidents Reported to ReCAAP Information Sharing Centre in 2018, Marking 25% Year-on-Year Decrease, and the Lowest in a Decade

ReCAAP Information Sharing Centre (ISC) yesterday (Jan15) released its Annual (January to December 2018) Report. Highlights of the report, whose information is verified by the respective government agencies, also known as Focal Points, and regional authorities, include: 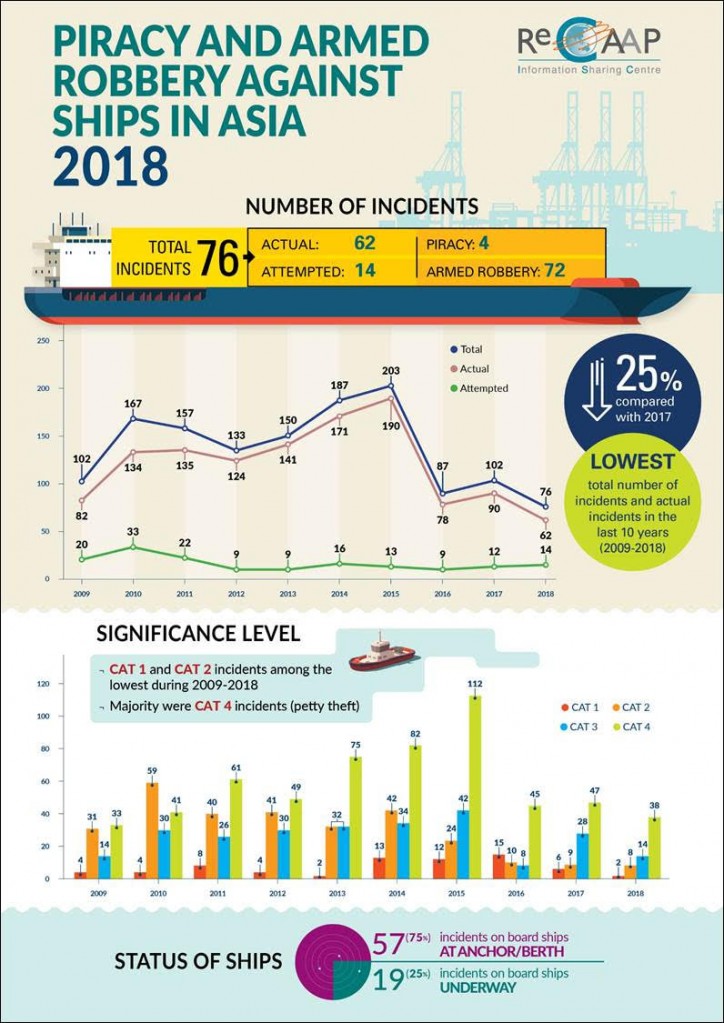 §  There was a total of 76 incidents of piracy and armed robbery reported in Asia between January to December 2018, comprising 62 actual incidents and 14 attempted incidents

§  Of the 76 incidents, four were incidents of piracy, while 72 were armed robbery against ships

§  There was improvement at some ports and anchorages in 2018, particularly at the Manila anchorage in the Philippines

§  There was no theft of oil cargo in 2018; while there were two incidents of suspicious intent to steal oil cargo reported in June and August 2018, the Malaysia Maritime Enforcement Agency (MMEA) successfully arrested the mastermind and perpetrators in both incidents

§  There were more than ten incidents at ports and anchorages  in Chittagong, Bangladesh, and in Samarinda, Indonesia

§  There were also slight increases reported in Malaysia and Vietnam

§  Despite the decrease in the number of incidents in the Sulu-Celebes Seas and waters off Eastern Sabah, the abduction of crew for ransom remains a serious threat in the area

Over the past 12 years (2007-2018), ReCAAP ISC has collected the data of 1,560 incidents of piracy and armed robbery against ships in Asia. These data enable the Centre to conduct deeper analysis on the nature of incidents.

Using data analytics, ReCAAP ISC has made several observations on the incidents of the past 12 years in the Annual Report on the patterns concerning the number of perpetrators, the weapons used, treatment of crew, items stolen, the types of ships boarded, and time of incidents reported in Asia.

The characteristics of the incidents in the past 12 years are:

The Annual Report (January to December 2018) was released at the 10th Nautical Forum was attended by more than 150 participants from shipping companies, industry associations, government/regulatory agencies, diplomatic missions as well as academic institutions.

“While ReCAAP ISC welcomes the recent downward trend in the number of incidents of piracy and sea robbery in Asia, we urge the law enforcement/regulatory authorities and shipping industry to continue the vigilance and cooperation that has led to the decrease,” said Masafumi Kuroki, Executive Director of ReCAAP ISC.

“In Asia, more than 90% of the incidents are armed robbery against ships, which occur in territorial waters of the Coastal States. Therefore, the ownership and efforts of the Coastal States in deterring, detecting, and apprehending perpetrators is vital in reducing the number of incidents in Asia, as are the vigilance and preventive measures by ships,” concluded Masafumi Kuroki.