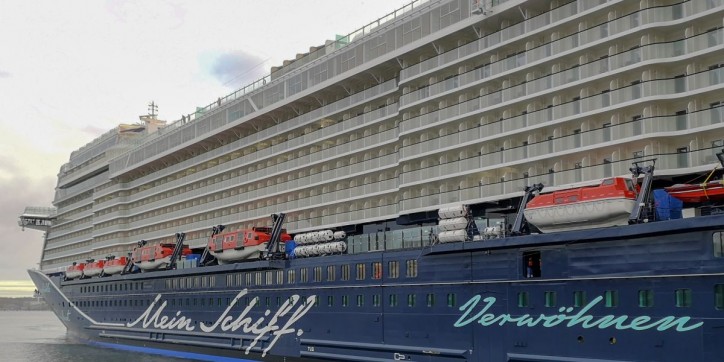 The newbuilding had already been relocated from icy Finland to Kiel at the beginning of the year arriving at the Osteseekai Terminal on 5th January. The nearly finished vessel received its finishing touch in Kiel. Simultaneously, over the past two weeks the crew embarkation process took place and the crew used the time to familiarise themselves with the operational processes aboard the ship.

Dr Dirk Claus, the Managing Director of the PORT OF KIEL (SEEHAFEN KIEL GmbH & Co. KG) said: “I am very happy that shipyard and shipping company selected Kiel for the final outfitting and the handover ceremony for the new “Mein Schiff 2”. It emphasises once again the trustful co-operation between the cruise shipping company and our port.” For the occasion of the official welcome ceremony for the ship, the Lord Mayor of the City of Kiel, Dr Ulf Kämpfer and PORT OF KIEL Managing Director Dr Dirk Claus presented the CEO of TUI Cruises, Wybcke Meier, and Captain Kjell Holm, with the traditional inaugural plaque right after the flags had been changed.

Lord Mayor Dr Kämpfer said: “It’s nice to be the first port to welcome this magnifi-cent new vessel of TUI Cruises. Well ahead of the start of the cruise shipping season 2019, this really is a highlight for our city.”

For as long as since 2009, TUI Cruises has been a longtime customer of the PORT OF KIEL. This year, Kiel expects no less than 30 further visits by the “Mein Schiff” fleet. The cruise ves-sels “Mein Schiff 1, “Mein Schiff 3” and the “Mein Schiff 4”, which was christened in Kiel, will be frequent guests on the fjord from the middle of May till the end of September.

As soon as Wednesday, 23rd January, the first guests will embark on the new vessel “Mein Schiff 2” which will leave Kiel at about 7 p.m. that day setting sail for the Great Belt. All in all, 179 cruise ship visits to Kiel have been registered to-date for this year. The port thus is expecting further growth in passenger numbers and ships sizes. To handle the growing number of large cruise ships the PORT OF KIEL is currently investing in a second terminal building for passengers and their luggage.

Dirk Claus: “We are investing about 9 million Euros to continue to provide first-class handling quality to the growing number of passengers in the future.”

Previously having handled two cruise ships using a single terminal at the Ostseekai, in future each cruise ship will have a dedicated terminal available to them for passenger and luggage handling. The second terminal building will be taken into operation during the course of this summer.

Source: Port of Kiel (Additional information about the Port at CruiseMapper)