For the first time in more than three decades, Huntington Ingalls Industries’ (NYSE:HII) Newport News Shipbuilding division was awarded a multi-ship contract from the U.S. Navy to build two aircraft carriers. The company announced Thursday (Jan31) that it received a contract modification valued at $15.2 billion for the detail design and construction of the Gerald R. Ford-class aircraft carriers Enterprise (CVN 80) and CVN 81, which has not yet been named. 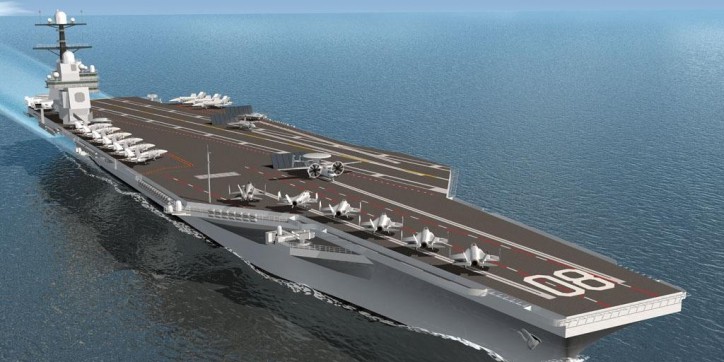 This historic contract award is a significant step toward the company’s designing and building the next-generation of aircraft carriers at the best value for the nation and is a defining moment in the history of the sole builder of nuclear-powered aircraft carriers.

The Navy’s decision to partner with HII to create the best acquisition approach will save more than $4 billion across the program.

“Today’s announcement is a triumphant step toward returning to a 12-ship aircraft carrier fleet and building the 355-ship Navy our nation needs,” said Jennifer Boykin, president of Newport News Shipbuilding. “Most importantly for us, it provides stability into the year 2032 for our workforce and for our supplier businesses across the United States.”

The construction of Enterprise, which began in 2017, and CVN 81 will be completed at the company’s Newport News Shipbuilding division. The ships are scheduled to be delivered in 2028 and 2032, respectively.

To support the contract, the company is making investment in facilities and will continue its digital transformation efforts.

“This contract award is something we should celebrate, and it is also something we should never take for granted,” Boykin said. “We have the responsibility to leverage the investments we are making in our workforce, the facility and in digital shipbuilding to become smarter, better, stronger. It is more important than ever that we execute efficiently and transform our business operations so that we leave a lasting legacy of our own.”

The strategy comes as a result of extensive collaboration with the Navy to reduce cost and drive efficiencies. The approach is not new, however. The Navy achieved substantial cost savings in 1980s when it used the procurement strategy to purchase the Nimitz-class aircraft carriers USS John C. Stennis (CVN 74) and USS Harry S. Truman (CVN 75) and USS Abraham Lincoln (CVN 72) and USS George Washington (CVN 73). The four ships were built by Newport News.

This contract modification comes after previous contract awards for the advance procurement and advance fabrication of Enterprise,starting in May 2016.

“History has its eyes on Newport News Shipbuilding, and today is a great reminder that we are all part of something much greater than ourselves,” Boykin said. “I could not be more proud of our shipbuilders and excited for our future.”