SAL Heavy Lift (SAL) delivers 12 bridge sections for the Beitstadsundbrua bridge from China to Norway. The final bridge is part of the largest road construction project in northern Trøndelag, will measure 580 m in length and will connect the municipalities of Steinkjer and Malm, crossing the Beitstadfjorden. The bridge will make travelling between northern parts of Trøndelag county considerably safer, as well as reduce travelling time significantly. 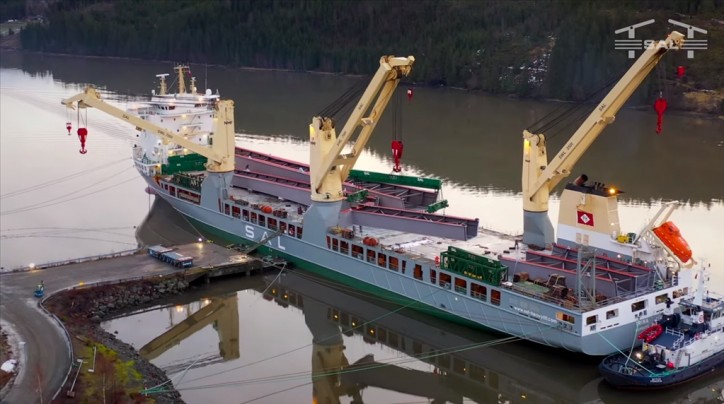 In a mountainous country like Norway, which is cut apart by deep fjords, bridge building is a virtue of necessity. Today there are over 18.000 bridges, summing up to 446 km and each with an average length of 250 m, spread across Norway. The latest addition will be the 580 m long “Beitstadsundbrua”.

Connecting the municipalities of Steinkjer and Malm, whilst crossing the Beitstadfjorden, the Beitstadsundbrua will not only be longer than the average bridge in Norway, but also ensure increased road safety and accessibility. All whilst helping locals to cut down travel times and benefiting the local economy and environment.

«The new County Road (FV 17 and 720) including Beitstadsundet Bridge, will eliminate the distance challenges the region has. The new road and bridge significant increases the municipality of Verran’s opportunities to further develop existing industries and attract new industry. The municipality is now, due to the new road and bridge, in dialogue with industrial companies exploiting establishment of industry in Verran”, states Jacob Almlid, Special Advisor Industry & Commerce at Verran Kommune.

With a total of four single lifts and eight tandem lifts, the SAL experts were able to stow all twelve bridge sections in two layers under deck, and another layer on deck of the vessel.

“It only took us 35 days to directly sail to Malm from Nantong in China,” Sune Thorleifsson, Head of Projects at SAL explains, “despite the unique conditions in the port of Malm, with an only 20 m wide jetty and 2 m tidal range, it took just 6 days until we were able to successfully and smoothly deliver 20.668 cbm of cargo to our client.” Due to local port regulations all twelve bridge sections were directly discharged onto SPMT’s, 25 m away from alongside the vessel. A tailormade mooring arrangement contributed to the success of the discharging operations.

“During the period of discharge of the bridge segments to the Beitstadsundet Bridge, onto SPMT`s for transport to Fosdalen-Industrier AS`s assembly site, we experienced a good and professional collaboration with SAL,” says Terje Skjevik, Owner & CEO of Fosdalen-Industrier AS, “we are very satisfied with the overall performance, on HSE, on technical and on schedule. All parties knew the challenging environment for the discharge, in spite of these challenges the operation and collaboration was excellent.”

Thanks to the detailed preparation work, which was done in close cooperation between SAL and their general agent in Norway Messers. Alex Birger Grieg AS, the last bridge section was successfully discharged early January 2019. Installation works are planned to start around Easter. The entire road building project, which involves building new and improved roads between the towns of Sprova, Malm and Dyrstad will be finished and open to public by the end of 2019.