Aberdeen Harbour’s £350-million expansion has reached another landmark stage with the first 6,000-tonne caisson beginning its journey to South Harbour on Monday (Feb25). 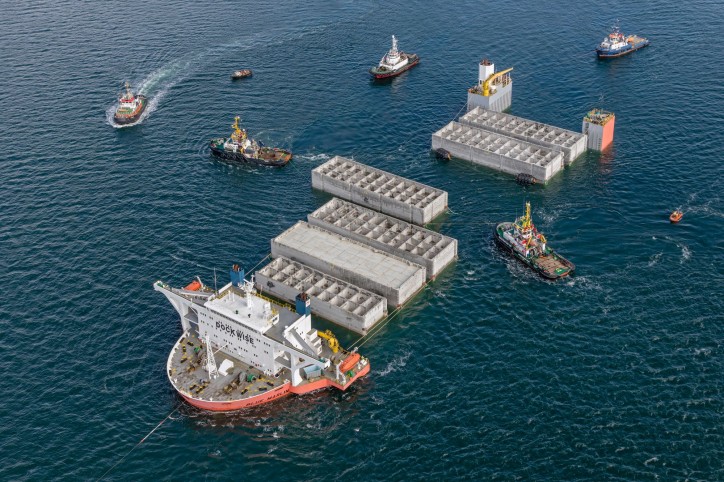 The concrete unit departed from Cromarty Firth Monday evening and will have an anticipated 48-hour arrival period into Aberdeen South Harbour between Wednesday 27th and Thursday 28th February, weather and tide dependent.

The first caisson measures 50 meters long, 15 meters wide and an incredible 16 meters deep and will be used to form the closed quay section of the development. In order to transport the caisson safely, it will travel the 180-nautical mile journey at two nautical miles per hour, escorted by ‘The Strathdee’ towage vessel.

Once the caisson has safely arrived in South Harbour, GPS equipment will be used to position it into its designated location with an accuracy of +/- 20mm.  It will then be filled with water to sink it to the sea bed. When in place, various fill material will be used to displace the water. The process from arrival to sinking takes approximately 30 hours.

A total of 22 caissons will form the foundations of Castlegate and Dunnottar Quays, which will be 540 and 400 meters long respectively.

Keith Young, Engineering Director at Aberdeen Harbour Board, said: “The arrival of the first caisson in South Harbour will be significant milestone in the expansion project, and a logistical achievement for us all.  I would like to congratulate and thank everyone who has been involved in the design, manufacture, transport and positioning of these caissons.

“Aberdeen South Harbour is of vital significance for our region and the rest of the country, and we look forward to the remaining caissons arriving as the project progresses.”

The caissons have been manufactured in La Coruna in North-west Spain and travel more than 1,000 miles by sea to the Cromarty Firth for quality checks and inspections.  They are then individually towed to Aberdeen when required, as construction of South Harbour continues.

In accordance with maritime tradition, each caisson is named after a family member of someone closely involved with the expansion project.  The first caisson to arrive will be named ‘Caisson Brenda’ – named after the Aberdeen Harbour Board’s Chief Executive’s mother.