RRS Sir David Attenborough, the UK’s new state-of-the-art polar research ship, was on the move on Saturday as the late stages of construction are undertaken at Cammell Laird’s Birkenhead shipyard.

The ship’s relocation to Cammell Laird’s non-tidal wet basin coincided with an announcement that Sir David is to present a new documentary about climate change for BBC One. Climate Change: The Facts is due to be screened this spring and will provide an urgent look at the science of climate change and potential solutions. 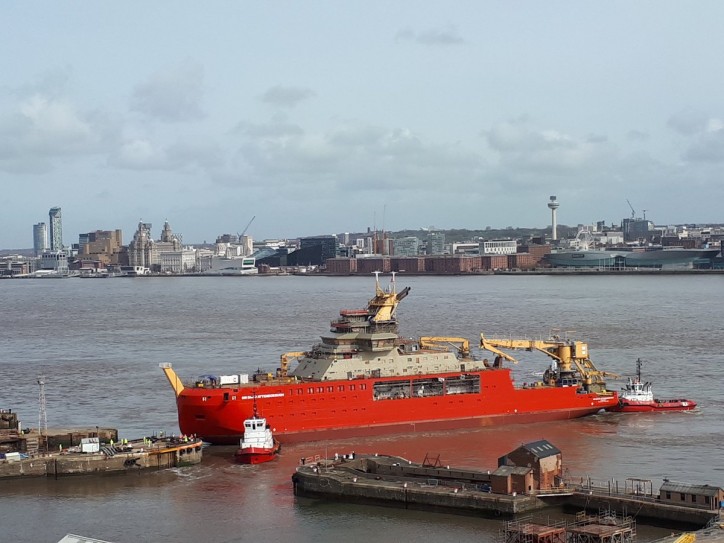 According to the BBC, the film will deliver “an unflinching exploration” of what dangerous levels of climate change could mean for human populations, what is likely to happen if global warming exceeds 1.5 degrees and if major reductions in CO2 emissions are not made in the next decade.

The documentary will also look at potential solutions, innovations and technology. It will consider actions being taken by the world’s governments and industries, and also focus on individuals who are creating change at grassroots levels.

RRS Sir David Attenborough is set to transform how ship-borne science is conducted in the Polar Regions. Speaking ahead of the hull launch in July 2018, the broadcaster highlighted the critical work that’s set to be undertaken on board the ship in the coming years.

He said: “Britain began exploring the Antarctic over a century ago when it seemed to be an empty wilderness of little importance to the world as a whole. Now we recognise that what happens at the Poles is of the greatest importance to everyone, everywhere.

“Everybody’s future will be affected by what people working on this ship – British scientists and others – will be discovering in years to come. As far as I’m concerned, to see this magnificent hull with my name on it is the greatest possible honour.

“I thank everyone who’s been involved with this wonderful enterprise and wish them huge success when this marvellous ship gets to the Antarctic, which we thought was so remote, but now realise is absolutely crucial to the future of all of us.”

Cammell Laird is proud to be building a ship of such personal, national and global importance.