Tuesday night, Foss Maritime departed the Port of Everett enroute to the Port of Los Angeles to pick up two gantry cranes for use at the Port’s modernized South Terminal.

The $57 million South Terminal Modernization project will ensure the Port’s facilities are ready to support the next generation of over-dimensional cargo, including aerospace parts for the new 777X. The two cranes are a critical piece in this loading and unloading efficiency.

“The completion of this upgrade will add another full-service berth at the Port to accommodate project, bulk, breakbulk, high and heavy and containerized cargoes,” said Carl Wollebek, the Port’s Chief Operating Officer. “We are excited to be able to add this additional option to our current and future customers.” 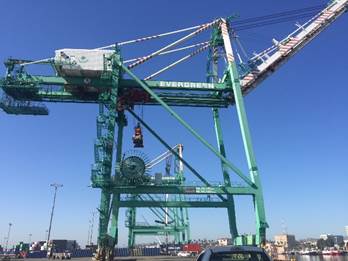 The South Terminal dock strengthening was necessary to support 2,400 tons of cranes – or the equivalent of 600 elephants. It will take the barge about seven (7) days to arrive into LA; 10 days to load the two cranes; and another 7 days for them to arrive back in Everett. Estimated arrival is June 6 or 7, 2019, depending on the sea state.

“We are excited to partner with the Port of Everett on this crane transportation project,” said Foss Vice President Paul Gallagher. “Foss Maritime and the Port of Everett have a long history of working together.  Marine transportation cargo projects like this allow us to use our specialized equipment and experienced people at our regional offices in Southern California and Puget Sound to safely perform this type of job. We look forward to this and to future projects with the Port.”

The cranes are an evergreen color but will arrive with significant orange bracing that will be removed once they are offloaded from the barge. The crane offloading is tidally dependent, so it is likely that the first crane will be offloaded on Monday, June 10, with the second crane offloaded on Wednesday, June 12. The cranes will be placed in storage for maintenance and upgrades and placed into operation after the South Terminal when the modernization project is complete. 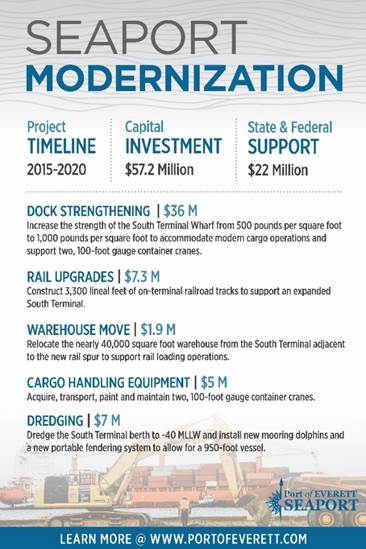 The South Terminal facility is a key piece of the Port’s overall Seaport Modernization efforts. It’s the largest of the Port’s docks by land footprint; however, the dock was originally built in the 1970s to support log operations, and in its current state, can only accommodate 500 pounds per square foot (psf). Modern cargo operations require a minimum of 1,000 psf. The South Terminal Modernization Project (Phase II) strengthens the remaining 560-feet of the 700-foot South Terminal dock structure (140-feet was strengthened as part of Phase I in 2015) and makes electrical upgrades at the wharf.

Upon completion, the dock will be strong enough to accommodate two, 100-foot gauge rail-mounted container cranes and provide vaults for ships to plug into shorepower while at the dock. In 2017, the Port completed two rail upgrade projects totaling more than $8 million. With the help of the Port’s 2-percent for public access policy, the project is also generating $586,000 to the city of Everett to improve public access along the waterfront that doesn’t conflict with a vibrant working waterfront.

The Seaport Modernization was supported by dozens of businesses, educational institutions and public agencies in our region. It was also made possible by both of our U.S. Senators: the project received nearly $22 million in federal loans from the TIGER grant program established by Sen. Murray and FAST Lane grant program from Sen. Cantwell, as well as the Congestion Mitigation Air Quality (CMAQ) program.