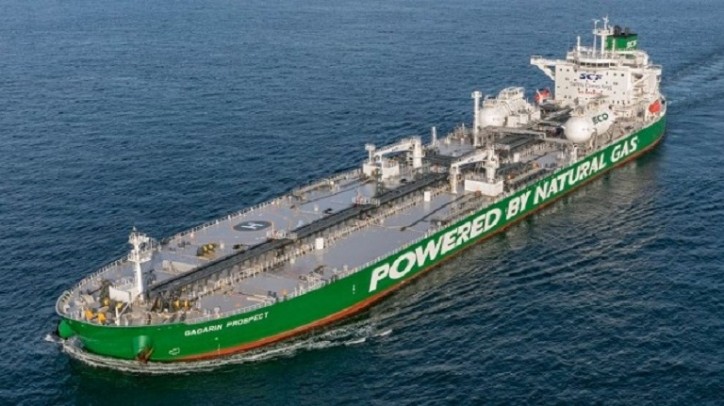 President & CEO of Sovcomflot Sergey Frank has received the award from Norwegian Minister of Trade and Industry Torbjørn Røe Isaksen in the presence of His Majesty King Harald V of Norway.

Gagarin Prospect is the lead ship in the ‘Green Funnel’ series of 114,000-dwt Aframax crude oil tankers designed to use LNG as a primary fuel. Switching to a cleaner-burning fuel enables to significantly reduce vessel emissions, which is particularly important for ships in high-traffic areas such as the Baltic and North Seas where Sovcomflot’s ‘Green Funnel’ vessels primarily operate.

Sergey Frank said: “It is a big honour to receive this trophy. We are grateful to Nor-Shipping for this recognition of our ‘Green Funnel’ initiative. Today, the shipping industry steadily transforms itself to become increasingly more sustainable, and we are proud that Sovcomflot is amongst those who lead this process. The switch to using LNG as a fuel could significantly contribute to reducing anthropogenic impact on environment. We firmly believe that adopting LNG as a primary fuel for large-capacity tankers is the right move.”

He added: “We’ve been working on the ‘Green Funnel’ for several years in close collaboration with our partners, Shell, Hyundai Heavy Industries, and DNV GL. Today, I want to share the honour of receiving this prestigious award with them all and express my gratitude for their support of the “Green Funnel’ initiative and their contribution to making these tankers a reality.”