Kawasaki Heavy Industries, Ltd. announced last Friday (Jun07) that it has developed an LNG floating power plant equipped with its own high-efficiency power generation equipment and that its gas engine model has obtained Approval in Principle (AiP)*1 from DNV GL*2 based on its “Gas Power Plant” rules which were introduced in 2018.

An LNG floating power plant is an integrated system in which LNG fuel tanks, LNG regasification unit, power generation equipment and switchyard are all outfitted on the hull. It is towed on the sea or river and then moored at the installation site, where it generates power on the hull that is then supplied to the onshore power grid.

Demand for this type of power plant is expected to be strong in countries where demand for electricity is rapidly increasing, such as in Southeast Asia, especially on islands or in locations where it is difficult to secure stable power sources, and also in areas with geographical problems such as lack of land for constructing onshore power plants. 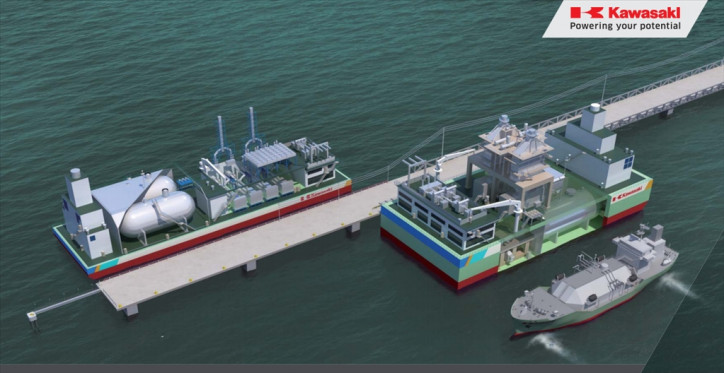 LNG, which is the fuel used for power generation, has a cost advantage over heavy oil and emits less greenhouse gases than coal and heavy oil. As an environmentally friendly fuel, the scale of supply and demand as well as applications of LNG are expected to expand.

The main features of Kawasaki - LNG Floating Power Plant are as follows:

(1) Gas engine (49.5%) or gas turbine (simple cycle: 40.3%, combined cycle: 54.4%) featuring the world's highest level in class of power generation efficiency, with low nitrogen oxide (NOx) emissions and low environmental impact, and which have been developed on our own.

(2)  The gas engine (in the gas engine model) can reach the rated load from start order in 10 minutes, and can also achieve high partial load performance over a wide power range (30–100%).

(3) A durable, heat-resistant aluminum tank with the same specifications as for small LNG carriers/bunkering vessels.

(4) High quality and reliable delivery achieved through a seamless manufacturing value chain that extends to our own factories for the main equipment: power generation facility, tank and barge.

Since constructing Asia’s first LNG carrier in 1981, Kawasaki has built over 40 LNG-related vessels, including large LNG carriers and LNG fuel vessels, and has received an order for Japan’s first LNG bunkering vessel. With its abundant expertise and rich experience, the company has been leading LNG transportation technology. In addition, in the power plant field, we have extensive capabilities of developing, designing and manufacturing the core equipment, gas engines, gas turbines, steam turbines and heat recovery steam generators (HRSG) using our own expertise, and have abundant experience of plant engineering in Japan and around the world. We also offer integrated package solutions for the LNG bunkering vessel and tanks for the LNG secondary terminal.

Taking advantage of synergies between these LNG and energy related technologies, Kawasaki will actively market its energy related equipment including small and medium-size distributed power sources, which contribute to development in areas where it is difficult to secure stable power sources.

*1  Approval in Principle (AiP) - To obtain confirmation by the classification society as a third party by a risk assessment and verification of compliance with classification rules for the conceptual design of new products and technologies.

*2  DNV GL - DNV GL is the world’s leading classification society and a recognized advisor for the maritime industry. DNV GL enhances the safety, quality, energy efficiency and environmental performance of the global shipping industry, across all vessel types and offshore structures. DNV GL is also a world-leading service provider offering technical consulting services in the oil and gas fields, and other such services.