Bigger ships are challenging the Port of Oakland with never-seen-before container volumes.  The Port said yesterday that vessels on average load and unload the equivalent of 1,767 20-foot boxes each time they visit here.  It’s the highest container move count in Port history, up 9 percent from 2018 and 50 percent over 2009. 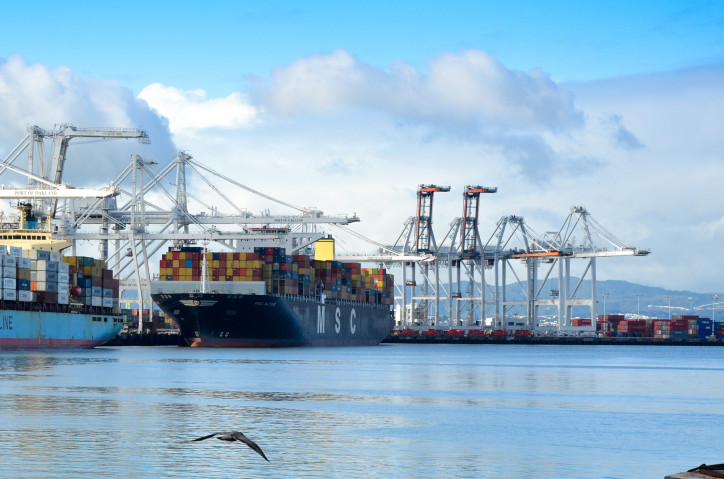 “Ships still depart within 24 hours of arrival and harbor truckers are usually getting in and out with their container loads in less than 80 minutes,” said Port of Oakland Maritime Director John Driscoll.  “It’s a tribute to the marine terminal operators who’ve stepped up to meet our cargo demand.”

The Port said Oakland terminals - where vessels load and unload - keep big ships on schedule thanks to high productivity.  The best example: Oakland ship-to-shore cranes can move as many as 30-to-40 containers per hour. That’s the highest productivity level on the U.S. West Coast, the Port added.

Higher vessel move counts are no surprise, the Port said.  That’s because Oakland set a record in 2018 by handling the equivalent of 2.55 million 20-foot cargo containers.  Volume is up another 5.5 percent so far, this year. But the impact of all-time high volume is being magnified by greater ship size, the Port said.

The Port explained that as bigger ships discharge more containers than in previous years, cargo-handling intensifies.  A greater number of exports must be loaded to vessels while simultaneously, more imports are taken off. Meanwhile, harbor truckers are arriving in greater number to haul containers to final destinations.

Big ships load and unload as many as 2,500 containers on Oakland visits, the Port said.  That’s less than some ports where move counts can surpass 10,000 boxes per vessel. It’s nevertheless an unprecedented challenge.

“It’s a matter of economics,” explained Mr. Driscoll.  “By loading more cargo on bigger ships, the shipping lines can actually reduce the number of vessels they deploy.”

Oakland vessel calls have declined 9.3 percent this year, the Port said, despite record volume.  That’s good for two reasons, the Port explained: there’s less crowding at vessel berths and ship emissions are down.