APM Terminals Barcelona provided an overview of the company's short and middle-term projects last week. Representatives of the port community, including the president of the Port of Barcelona, Mercè Conesa, and the deputy director of State Ports, Javier Martín Santodomingo attended. 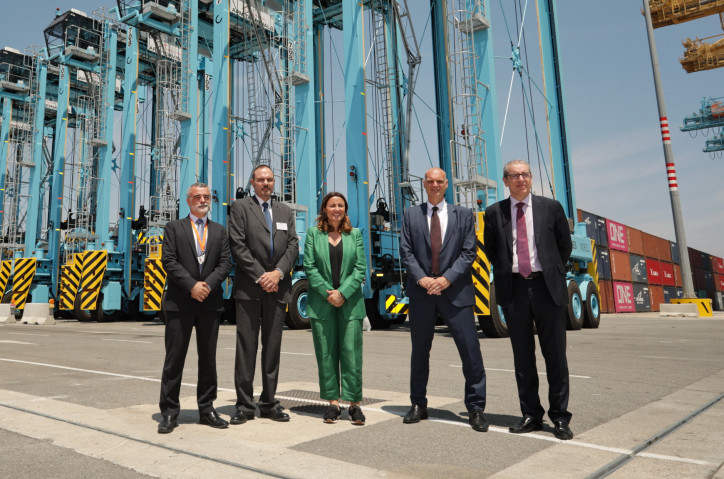 “These recent investments are part of APM Terminals' strategy to modernize its current fleet and increase equipment capacity and productivity, as well as improving safety at the Barcelona terminal," said Narcís Pavón, General Manager of APM Terminals Barcelona. "We have renewed our commitment to the Port of Barcelona, equipping ourselves with the latest technology necessary to service the most modern container ships that currently stopover in the Catalan capital."

APM Terminals has invested €47 million in the Port of Barcelona over recent months. The most recent investment was the acquisition of 29 new straddle carriers, which will help APM Terminals Barcelona improve efficiency once operational this month.

The terminal also took delivery of two new Super Post Panamax cranes in April this year. The two new Ship-to-Shore cranes, which are now operational, allow operations with ships of up to 23 containers across the beam. In addition, they are capable of lifting 100 tonnes and can also operate in TWIN mode (2x20’), which allows the terminal to further increase efficiency, offering customers the highest productivity out of all the Mediterranean terminals.

This year the terminal also increased its reefer capacity by 31% through the installation of reefer racks that enable reefer containers to be stacked four high. The terminal now has a total of 632 connections, which allow for the expansion and increased rotation for equipment connections as well as complementary services. At the same time the electrical capacity of the terminal was also improved, leading to a reduction in CO2 emissions of 600 tonnes per annum. This is the largest investment of its kind made in the Barcelona terminal.

Also in support of high operational standards related to efficiency and security, APM Terminals launched real-time container tracking and vessel schedules via its website – available to both desktop and mobile users.

In June, APM Terminals Barcelona also received Authorised Economic Operator (AEO) status for protection and security from the Spanish Tax Agency. This certification standardises the terminal's customs operations, closing the circuit of customs processing and security in national and European transport. The purpose of the AEO status is to apply more rigorous and effective security measures and at the same time facilitate the flow of goods in international trade.

"These latest investments will strengthen our position as a leader in the maritime business,” Pavón commented.

"With this operation, APM Terminals demonstrates its firm commitment to efficiency and to providing greater transparency in the logistics chain, thanks to an innovative service that permits users to see the real-time status of containers. Improved energy efficiency of the new equipment will also result in reduced emissions," declared Mercè Conesa.

"The company's significant investment underpin the Port of Barcelona's strategic plans, based on competitiveness, sustainability and innovation", added Conesa, who thanked APM Terminals for its commitment to Catalan infrastructure.

Source: APM Terminal (Additional information about the Port of Barcelona at CruiseMapper)