The Elly Maersk departed from Nansha for Rotterdam on 28 July; the first departure of the new 2M service, doubling the number of direct departures from Nansha to Rotterdam. The Ocean Alliance also already has direct connections with this fastest-growing port in the south of China. 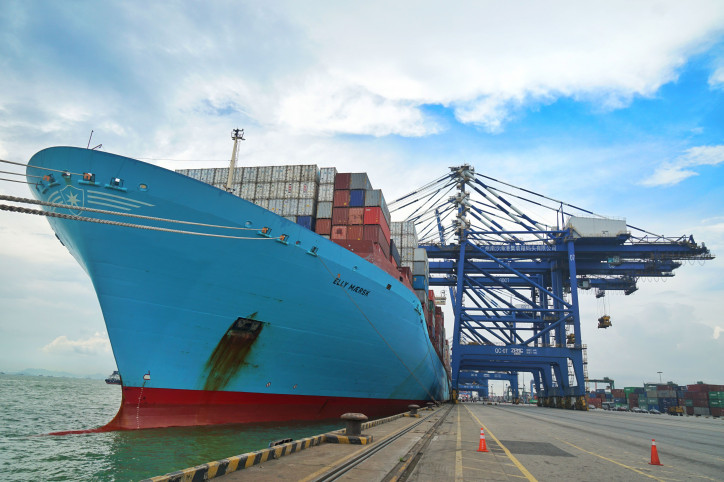 Nansha is the seaport of Guangzhou, a city of 15 million people in the vicinity of Hong Kong. The port started international departures ten years ago, quickly becoming the most important port for ‘Africa Trades’ from the south of China. Direct departures to and from Europe (NWC and MED) and the west coast of North America were only added in recent years. With a throughput of over 14 million TEU, Nansha has already surpassed Europe’s largest container ports.

‘The Port of Nansha is playing an increasingly important role in the ‘Greater Bay Area’, an area recently designated as Metropolis by the Chinese government. This area stretches from Guangzhou to Shenzhen, Hong Kong, Macau, Zhuhai and many residential and industrial centres in between. Some 60 million people live in this area, the three large cities being Guangzhou, Shenzhen (15 million residents) and Hong Kong (8 million residents)’, stated Johan Nanninga.

He was appointed as CEO of Guangzhou Port Europe two-and-a-half years ago. He runs his office from The Hague.

‘My work area covers the whole of Europe. I maintain contact with shipping companies, international freight forwarders and consignors to see how Nansha can play a role in optimising trade flows with South China. Trade is a flow that is in continuous movement. The tremendous splendour of freight flows means that new players become important.

For instance, you see that what you previously always transported via certain hubs can suddenly be much better served via new routes. Developments in consumer groups, e-commerce and technology also mean that people constantly need to look for new options. Nansha is a good example of this, which is why we are seeing a 40 per cent increase in trade flows between Nansha and Europe. Rotterdam plays an extremely important role in this.’

‘In the Greater Bay Area we are seeing a shift of industry to the hinterland and the west. Shenzhen and the hinterland on the eastern bank of the Pearl River are increasingly being transformed into residential areas and high-tech and service economies.

Nansha on the western bank of the Pearl River, on the other hand, is becoming more and more interesting for import and export. The port’s increasing proximity to new production centres and very competitive costs make it a good choice in comparison with Shenzhen ports, which are becoming more expensive. The lower costs and available space have also resulted in Nansha’s rapid expansion as port for import flows. The port is located in a 65-km2 ‘Free-Trade Zone’, making it an increasingly important hub for the import of consumer goods, food and drinks. Nansha has started with the construction of the largest climate-controlled warehouse complex in South China (150k m2, with three floors). This will become operational in early 2021.

Nansha’s terminals will also be linked directly with the Chinese Rail network in the near future (October 2020). This will enable extremely economic and sustainable transport of cargo flows from and to Nansha from the hinterland in South China, even as far as Chongqing and Chengdu.’

Source: Port of Rotterdam Authority (Additional information about the Port Nansha at CruiseMapper)