President Trump tweeted on Friday that his administration will boost tariffs on $550 billion in Chinese imports in retaliation for China's decision on Friday to hike trade levies on $75 billion in U.S. products. The move deepens a trade war that many fear could tip the U.S. and global economies into recession.

The president said U.S. tariffs on $250 billion in Chinese imports will increase from 25% to 30% on October 1. An additional $300 billion in Chinese goods will be taxed at 15%, instead of 10%, starting on September 1. The stepped-up tariffs means the U.S. has hiked taxes on virtually all goods imported from China.

Great respect for the fact that President Xi & his Representatives want “calm resolution.” So impressed that they are willing to come out & state the facts so accurately. This is why he is a great leader & representing a great country. Talks are continuing!https://t.co/0sotrd1Mzh

The Office of the U.S. Trade Representative said in a statement that the U.S. tariffs on $300 billion in goods from China will take effect at the higher rate in two phases as previously scheduled — one on September 1 and one on December 15.

The tariff hikes come after the president earlier on Friday had signaled he planned to respond to China's own trade escalation. "I will be responding to China's Tariffs this afternoon," he wrote on Twitter. "This is a GREAT opportunity for the United States." 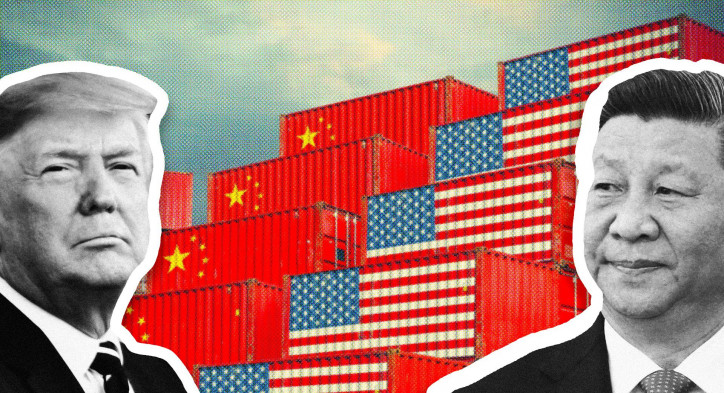 Mr. Trump also said he was "ordering" U.S. businesses to "immediately start looking for an alternative to China," including bringing their manufacturing back to the U.S. However, it wasn't clear how he planned to force companies to do so, given that many rely on China for manufacturing that's far more economical than is possible in the U.S.

Late Friday, Mr. Trump defended his decision to order U.S. companies to "start looking for alternatives" to China, citing the Emergency Economic Powers Act of 1977. The law gives the president authority to regulate commerce after an "unusual and extraordinary threat" is declared.

Federal Reserve Chairman Jerome Powell and other policymakers warn that a prolonged trade war between the world's two largest economies could sap global growth. Markets sagged on Friday after China's move to raise tariffs and Mr. Trump's vow to retaliate. The Dow closed down more than 600 points, or 2.3%, the Nasdaq plunged 3% and the broader S&P 500 lost 2.6%.

"It's impossible for businesses to plan for the future in this type of environment," David French, vice president of government relations for the National Retail Federation, said in a statement. "The administration's approach clearly isn't working, and the answer isn't more taxes on American businesses and consumers."

Rick Helfenbein, CEO of the American Apparel & Footwear Association, complained that the White House's approach amounts to a "1930s trade strategy," saying that it "will be a disaster for American consumers, American businesses and the American economy."

No end in sight

For Mr. Trump, a key concern is whether the escalating conflict could lead to a further reduction in Chinese purchases of U.S. crops, a potentially serious blow for American farmers. Zippy Duvall, head of the American Farm Bureau, said in a statement that China's increased tariffs on U.S. imports signal "more trouble for American agriculture," while expressing concern that any retaliation "adds to the difficulties farm and ranch families are facing."

More broadly, economists say that sharply higher tariffs on Chinese goods could raise prices for consumers on everything from phones and video consoles to apparel and shoes. Meanwhile, the latest escalation in trade tensions comes amid signs that the U.S. economy is slowing down, including declining corporate profits and a dip in job-creation.

Paul Ashworth, chief U.S. economist with Capital Economics, thinks the direct hit to the U.S. economy from the volley of tariffs is likely to be modest. Tacking on an additional 5% in duties on $550 billion in Chinese imports amounts to a roughly $27 billion tax spread out among American consumers. The bigger threat, according to Ashworth — uncertainty over when — and if — the conflict might end.