Second of Two LNG carriers for Mitsui & Co. to be used in the U.S. Cameron LNG Project

The ship, named MARVEL HERON, is Mitsubishi Shipbuilding's newest carrier that achieves significant improvements in both LNG carrying capacity and fuel performance through adoption of a more efficient hull structure and an innovative hybrid propulsion system. After completion scheduled in September, the MARVEL HERON will go into service primarily transporting LNG for the Cameron LNG Project, in which Mitsui is a participating partner. 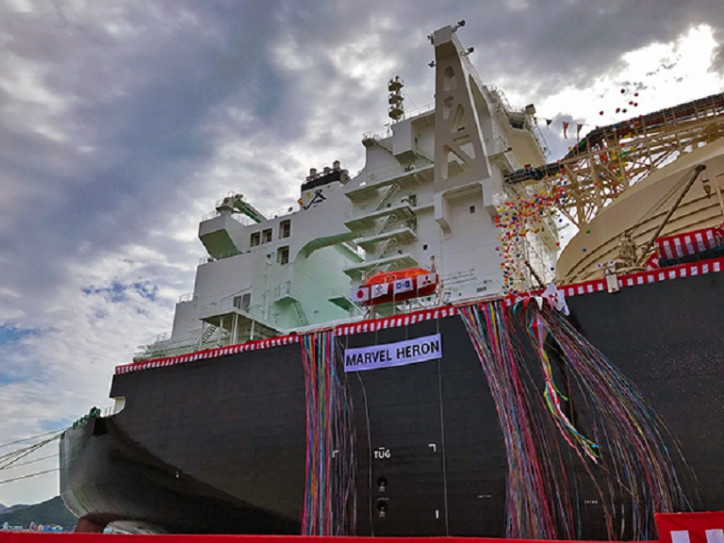 The MARVEL HERON is the second LNG carrier of its type built by Mitsubishi Shipbuilding for Mitsui. It features LOA (length overall) of 297.5m, width of 48.94m, depth of 27.5m, and draft of 11.4m. Deadweight capacity is approximately 79,000 tons, and the total holding capacity of the tanks is 177,000m3. The order for the MARVEL HERON was received through MI LNG Company, Limited, a joint venture established by MHI and Imabari Shipbuilding Co., Ltd. to design and market newbuilding LNG carriers. Construction was undertaken by Mitsubishi Heavy Industries Marine Structure Co., Ltd., a Nagasaki-based MHI Group company, and launching took place on February 2, 2019. 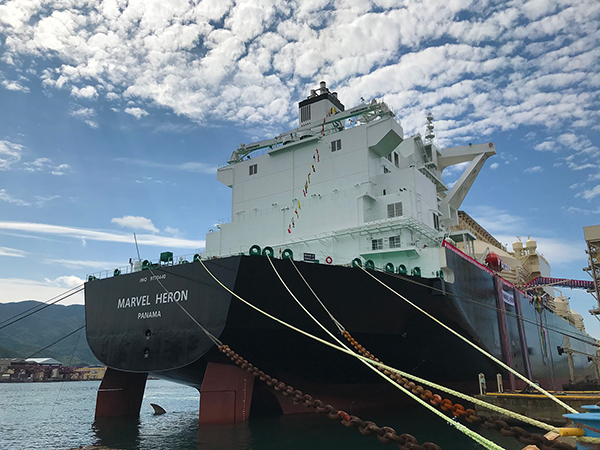 Both ships ordered by Mitsui for the Cameron LNG Project are named after migratory birds. Besides the MARVEL HERON, its sister ship was christened the MARVEL CRANE at a ceremony held on February 21, 2019. The MARVEL CRANE was handed over to Mitsui on March 28 and is now in service.

The new vessels are equipped with apple-shaped tanks refined from MOSS-type spherical tanks, which are known for their outstanding reliability (Note1). This innovative tank structure results in increased LNG carrying capacity while keeping the ship's beam within the parameters of passage through the newly expanded Panama Canal. Ship propulsion is performed by "STaGE," a hybrid system combining a steam turbine and gas-fired engines (Note2). It consists of MHI's proprietary high-efficiency reheat Ultra Steam Turbine (UST) for ships, a dual-fuel diesel engine that accommodates both gas and oil, and an electrically propelled engine. Effective use of the waste heat from the engines to drive the UST results in significantly enhanced plant efficiency, enabling efficient navigation at all speeds, high to low.

(Note 1)Moss tanks are spherical tanks fixed to a ship’s hull by a cylindrical skirt.
(Note 2) STaGE is an acronym derived from "Steam Turbine and Gas Engines."