Twenty two sailors were rescued from a burning ship in the Bay of Bengal after a massive, coordinated effort by the Indian Coast Guard, the Navy and Kolkata Port Trust. The ship, called MV SSL Kolkata, has been abandoned and is currently adrift and heading for the high seas.

MV SSL Kolkata caught fire around midnight while it was anchored at the Sandheads at the mouth of the Hooghly on the Bay of Bengal. The ship's crew was in no position to send out an SOS. Passing ships reported the disaster to Kolkata Port Trust at Haldia.

The Coast Guard ship Rajkiran immediately left Haldia for rescue operations along with a firefighting tugboat called Ocean Valour. But they could reach MV SSL Kolkata only around 8 AM because of choppy waters. Strong winds had fanned the flames on the vessel out of control. By noon, the crew decided to abandon ship as 70% of the vessel was on fire.

The navy had meanwhile dispatched one Sea King 42C helicopter and a Dornier aircraft from Visakhapatnam to assist the Coast Guard, but were not eventually deployed in the rescue ops. 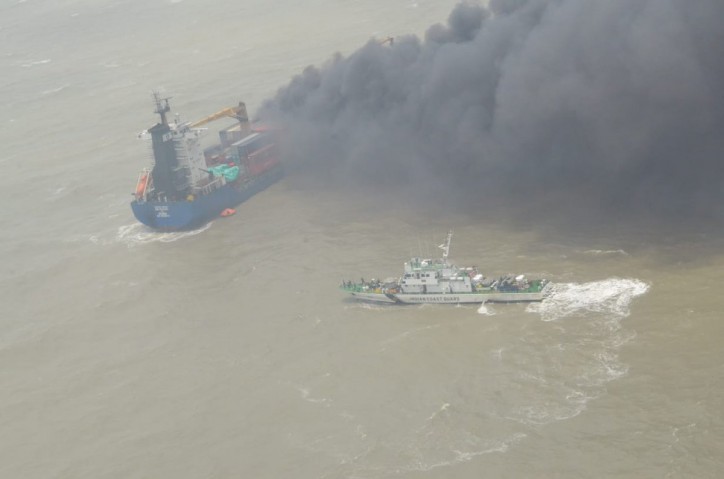 "All the 22 survivors including the captain of the ship were picked up by the Coast Guard vessel," Coast Guard Commander (NE) Inspector General KS Sheoran said. The cause of the fire could be chemicals that were being transported by MV SSL Kolkata. Mr. Sheoran did not rule out the possibility of an oil spill from the ship but according to last reports, there are no signs of any. The Kolkata Port Trust has asked the National Remote Sensing Centre to track the area for oil spills.

The sailors were being brought back to Haldia and were expected to reach at around 10 pm.

The abandoned vessel is drifting south-east, away from shipping lanes on the river, according to KoPT. A tug is monitoring the drifting vessel. The Directorate General of Shipping has also been roped in for monitoring the situation. Owners of the vessel have been asked to arrange for salvage and pollution response vessels and equipment urgently.

The West Bengal Government has been kept abreast of the situation.