The 326-metre, 145,655 GT, cruise ship Norwegian Breakaway arrived in Brest on 28 April for 11 days of scheduled maintenance and refurbishment. 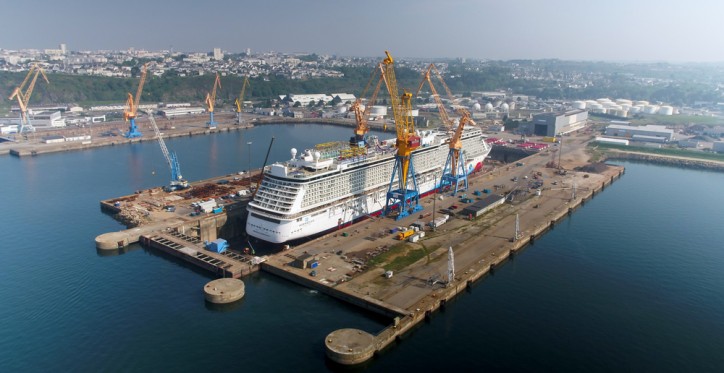 The primary objective of the visit was mechanical works on the ship’s two ABB azipods. The DSBr team worked alongside ABB service engineers on both azipods to repair the shaft bearings and replace the slewing seals. These works required the removal of both propellers and took place in very close coordination with the other teams working on the vessel to ensure that no dust and other contaminants entered the complex systems within the azipods.

At the same time, DSBr technicians worked with personnel from Brunvoll AS to undertake maintenance of the vessel’s three bowthrusters, as well as dismantling, maintaining and then refitting the two Fincantieri stabilisers. The hull was also repainted, which involved the usual paintworks plus the decorative artwork on the vessel’s forward topsides. 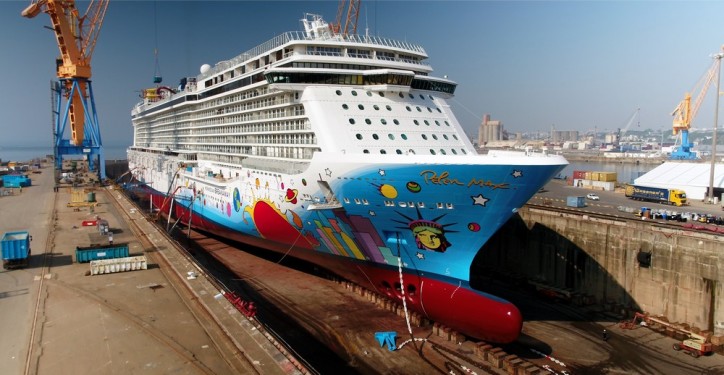 While the Norwegian Breakaway (see also CruiseMapper) was in DSBr’s 420-metre, number 3, dry dock, large quantities of the carpets inside the cruise ship were removed and replaced by a specialist contractor as part of a rolling programme. DSBr managed the 24/7 logistical flow, ensuring that old carpets were removed on time and the new rolls available for fitting. In addition to the scheduled tasks, that yard also ensured that the client’s subcontractors received full support and handled a wide range of unforeseen requests ranging from the provision of materials and tools to the erection of interior scaffolding.

Laurent Salou, Project Manager at Damen Shiprepair Brest, commented: “I truly believe that all the personnel at Damen Shiprepair Brest really appreciated the opportunity to work on Norwegian Breakaway as the collaboration with the ship’s staff was more than excellent during the entire dry-docking period. I’m personally really proud of the work which has been achieved by my colleagues, and honoured to have worked on such a notable project.

“The client chose us for this project not only because we are capable of handling a ship of this size, but also because we are close to the major cruise terminal at Southampton, which was its last port of call. They were also very satisfied with the works that we performed on the Norwegian Epic in 2015 and I am pleased to be able to report that the client was very happy with performance of the DSBr workers and the yard on this project as well.”

The Norwegian Breakaway left Damen Shiprepair Brest (see also CruseMapper) on 8 May at noon, six hours ahead of schedule.