Port of Oakland’s clean-air vision: a path to zero-emissions

The Port of Oakland announced yesterday that it has embarked on a path to emissions-free cargo operations.  The ambitious target is at the heart of a draft air quality improvement plan sent out for public review June 29.  It calls for reducing criteria pollutants and greenhouse gases at Oakland’s seaport – technology, feasibility and budget willing. 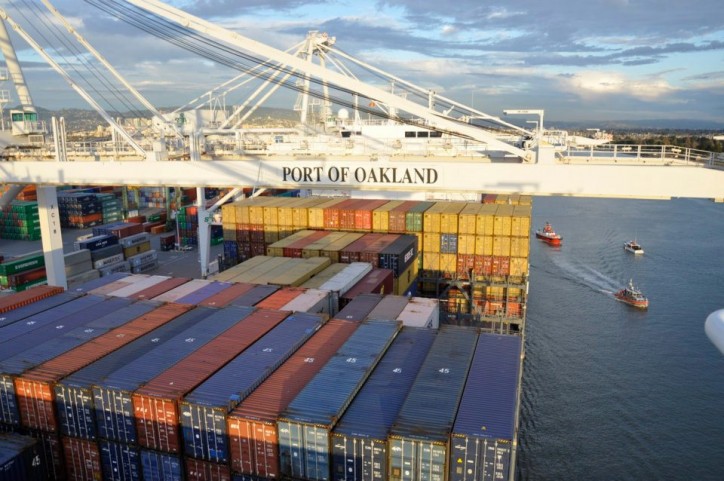 “This is a bold and ambitious plan.  Achieving a zero-emissions seaport will take years, requiring substantial investments in transformative technology, new infrastructure and equipment,” said Richard Sinkoff, Director of Environmental Programs and Planning at the Port and principal architect of its clean-air plan.  “But we are 100 percent committed to eliminating emissions related to the movement of containerized trade, wherever and as soon as we can.”

Called the Draft Seaport Air Quality 2020 and Beyond Plan, the 30-page document would transform how Oakland operates.  It proposes everything from electric trucks to new infrastructure to eradicate freight transport emissions. It would attack both diesel particulate and greenhouse gas emissions.

Zero-emission operations means most Port trucks and terminal equipment would be powered by sources other than diesel fuel.  Alternatives could include battery power or other fuel from renewable sources, the Port said.

Under the plan, visiting vessels in Oakland would continue switching off engines and plugging into the landside power grid.  Nearly 80 percent of ships calling Oakland do that now. The plan promotes higher levels of shore power use.

The Port didn’t put a price tag on its plan, but said implementation would be costly.  It added that public sector funding and investments by businesses serving the Port would be essential in moving toward emissions-free operations.

Oakland’s draft plan arrives as the state of California is formulating stricter regulations for cargo transport.  The state is expected to curtail diesel-powered freight hauling and put tougher restrictions on all sources of emissions in the next few years.  California ports, including Oakland, have developed their own plans in advance of new state mandates.

More than 1,500 ships visit the Port of Oakland annually carrying the equivalent of 2.5 million 20-foot containers.  Between 3,000 and 5,000 trucks haul boxes daily at the Port. Oakland has reduced diesel emissions from those sources by 76 percent in the past decade.  The Port said it wants further reductions – ideally to zero – to mitigate the impact of trade on nearby communities and to abate climate change.

The Port said it has planned a public engagement process before the draft air quality plan becomes final.  It will include a series of public meetings to be scheduled this fall.

The Port posted its plan on the Port of Oakland website June 29.  It has since distributed copies to East Bay library branches to reach residents who may not have access to technology at home. Click HERE to see the Port’s draft air quality plan.

The Port said it expects to have a final plan in place by year-end.