On 21 July, APL, together with the Yokohama Port and Habour Bureau and Yokohama-Kawasaki International Port Corporation celebrated the maiden arrival of President Kennedy at the Port of Yokohama.

Deployed for APL’s Eagle Express 1 (EX1) service, President Kennedy is the first of six vessels that were newly-named after former U.S. Presidents to call the Japanese port. Following this, the Yokohama port will be expecting President FD Roosevelt; President Wilson; President Cleveland; President Truman; and President Eisenhower to each arrive with their weekly EX1 shipments.

“We are thrilled to have U.S. President-named ships to once again call Japan where APL started serving 151 years ago, almost two decades years after APL was founded in 1848. These vessels join some 90 APL ships that were named after U.S. Presidents, continuing a legacy that began in the 1920s. Importantly, they are befittingly deployed for APL’s U.S. flagged service, EX1 which has just been refined with a faster U.S. West Coast – Japan transit time,” said Uchida Hideki, APL Cluster Director, Northeast Asia. 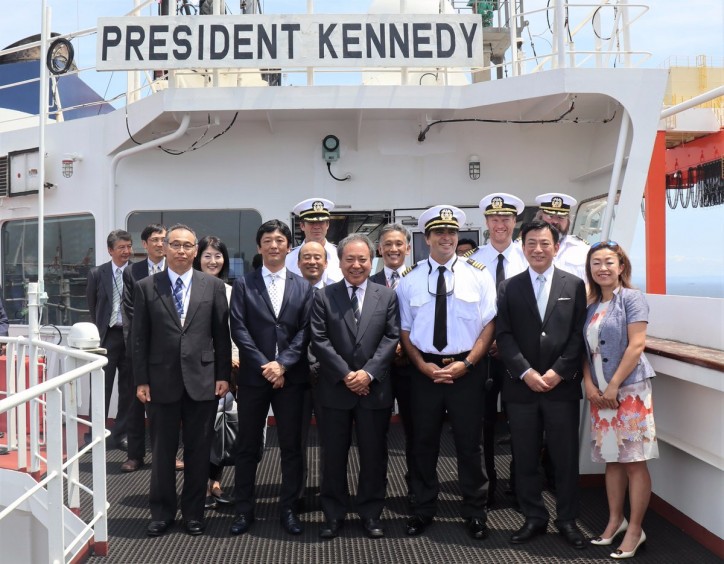 The improved EX1 service now offers a faster 13-day transit from Los Angeles to Yokohama, arriving Japan two days sooner than before. This has expedited imports such as frozen meat, fish, vegetables and fruit from the U.S. to Japan. Meanwhile, EX1 cargoes that are bound for Guam and Saipan via APL’s Guam Saipan Express (GSX) service from Yokohama will now reach Guam every Monday, the earliest cargo arrival of the week on the island.

Click here for more information on the EX1 service.