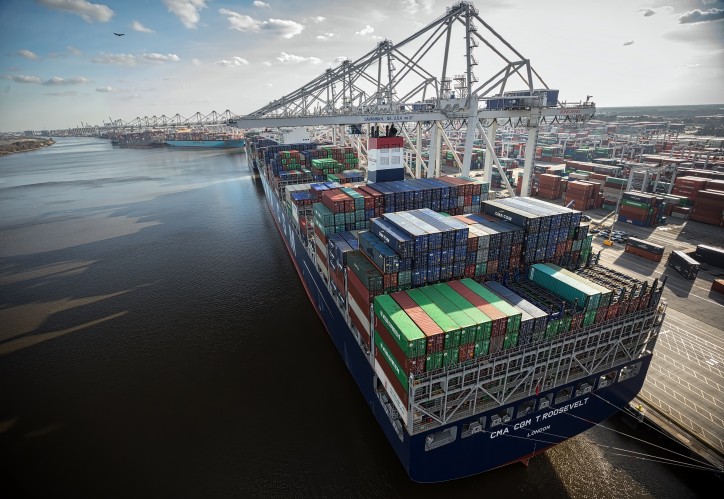 “Moving more than 4 million TEUs in a single fiscal year is an important milestone for Georgia,” said GPA Executive Director Griff Lynch. “Georgia’s logistical advantages, along with the Southeast’s population growth, have resulted in increased demand, while the expanded Panama Canal has cleared the way for larger vessels to call Savannah.”

“Outstanding effort from our GPA employees, the International Longshoremen’s Association, stevedores, trucking and rail personnel made it possible to exceed customer expectations and achieve record results,” said GPA Board Chairman Jimmy Allgood. “I cannot say enough about the partnership and can-do spirit of the Georgia maritime community.”

“The market’s increasing recognition of Georgia as a rail hub for East Coast container trade reinforces our determination to double Savannah’s on-terminal rail lift capacity,” said Lynch. “The Port of Savannah is poised to capture new rail cargo across the state, the Southeast and well into the American Midwest.”

At its meeting Monday, the GPA board approved construction of an $8.8 million overpass, part of the $127 million Mason Mega Rail project that, upon completion, will allow 10,000-foot unit trains to be built on terminal. This, along with other improvements, will increase Savannah’s annual rail lift capacity to 1 million containers by 2020, thereby cutting transit time to markets such as Memphis, St. Louis, Chicago and Cincinnati by 24 hours.

In August, the GPA will open its Appalachian Regional Port, an inland rail terminal that will take 50,000 trucks off Georgia highways. Removing the need for a 710-mile roundtrip via truck, the ARP will improve container availability and reduce transportation costs for port customers in Georgia, Alabama, Tennessee and Kentucky.

Lynch also reported Monday that total cargo crossing all GPA docks in FY18 grew by 8 percent, or 2.6 million tons, to reach a record 36 million tons of containerized, breakbulk and bulk cargoes. Forest products at Mayor’s Point Terminal in Brunswick increased by 34.5 percent, up 35,953 tons, for a total of 138,653 tons. Machinery, as well as commodities such as rubber and paper, pushed the breakbulk total at Savannah’s Ocean Terminal to 1.35 million tons, up 10 percent or 122,305 tons compared to FY2017.

In other business Monday, the GPA board approved the expansion of refrigerated cargo capacity at Garden City Terminal. The project will add 15 refrigerated container racks, accommodating a total of 360 additional containers. The Port of Savannah currently features 104 racks, holding 2,496 containers at a time.

The board also approved the purchase of 10 additional container handling machines, at a cost of $3.5 million.