On Friday, 20 July one of the largest cruise ships to enter the Port of Riga this year, Serenade of the Seas, moored at the passenger terminal in the centre of the city. The length of the ship, which was built in 2003 in Germany, is 293 metres, the width is 39.8 metres and the maximum draught is 8.5 metres. The mooring of a ship of this size in the centre of Riga has been possible due to cleaning works carried out by the Freeport of Riga Authority in the approach channel and the ship-turning basin. 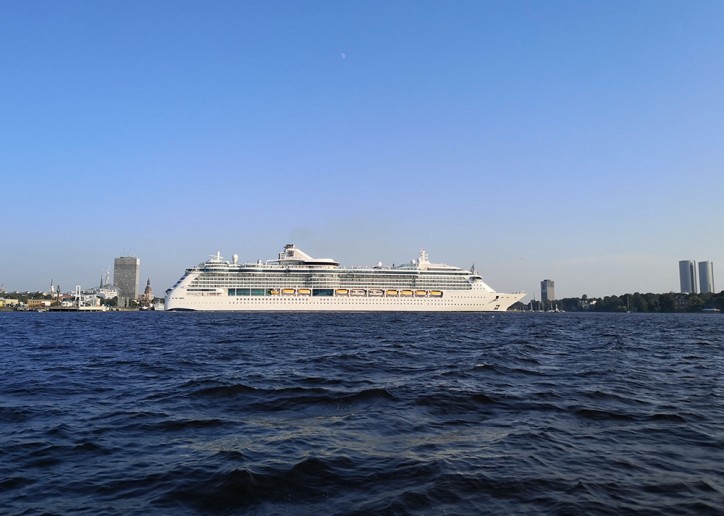 Serenade of the Seas visited Riga (more info about the port at CruiseMapper) for the fourth time this year. Previously, the ship was not seen in the centre of the city, as it was moored to the KS Terminal pier in Krievu Island, where the depth and the size of the turning basin allowed accepting larger cruise ships. Moreover, it will be further possible to handle ships of this size in the centre of Riga at the piers of the passenger terminal.

In the course of the work the approach channel to the piers of the Riga passenger terminal and the approach aquatorium of these piers were cleaned of sediments; likewise, the diameter of the ship-turning basin was extended from 380 metres to 400 metres. According to the results of the procurement procedure, these works were carried out by the company Rohde Nielsen AS. In general, 111,000 m3 of soil were excavated from the river bed and used for the needs of construction works in Kudziņsala for the implementation of the project “Overpass from Tvaika Street to Kundziņsala”.

Artūrs Brokovskis, Freeport of Riga Captain, says “Of course we want to accept as many cruise ships as possible at the passenger terminal piers in the centre of Riga. There is infrastructure suitable for the acceptance of passengers and tourists are undoubtedly more satisfied if they can disembark the ship in the very centre of the city. Until now, the acceptance of larger ships in the Riga passenger terminal was prohibited due to the inappropriate depth of the navigation canal and the approach aquatorium of the piers, but mostly due to the size of the ship-turning basin, which prohibited long cruise ships from turning in this place.”