Dublin Port cargo volumes increase by 5.2% in the first half of the year 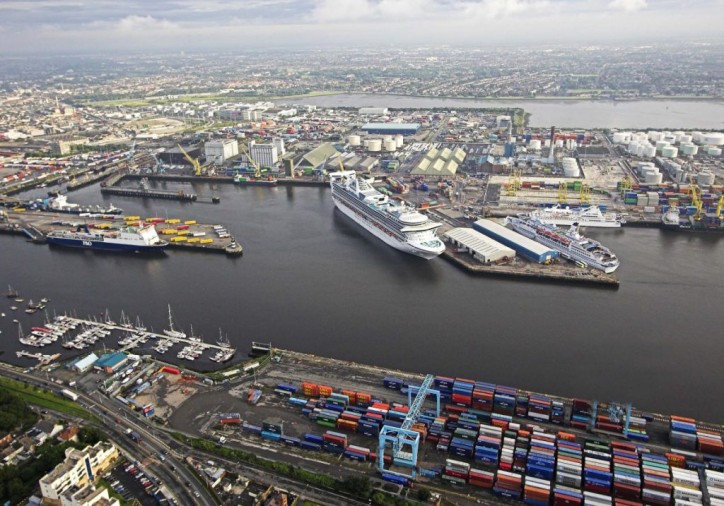 Achieving a higher throughput on a smaller footprint than originally envisaged is being made possible by two initiatives:

Masterplan 2040 Reviewed 2018 is the culmination of an 18-month review period, supported by extensive public consultation and the completion of major environmental studies, including a Strategic Transportation Study and a Strategic Environmental Assessment, which identifies reduced environmental impact from the developments now proposed compared to what was originally proposed in 2012.

From the plans highlighted in Masterplan 2040 Reviewed 2018, Dublin Port will bring the second major Masterplan project (the MP2 Project) forward for planning before the end of the year. This project will provide much needed additional capacity on the north side of the port for Ro-Ro and Lo-Lo services to both the UK and Continental European markets.

Beyond this the Masterplan describes developments for port lands on the Poolbeg Peninsula including the building of a new Southern Port Access Route (SPAR) to provide access between the Dublin Port Tunnel and the south port lands. These developments will constitute the third and final major Masterplan project and will be completed before 2035.

The Masterplan also identifies the need for reviews of port infrastructure charges to ensure that Dublin Port can be developed in line with Government policy (no exchequer funding) and in compliance with the EU Port Regulation 2017/352 due to come into effect in March 2019.

Commenting on the revised Masterplan, Eamonn O’Reilly, Chief Executive said: “The revised Masterplan is founded on our commitment to the proper planning and sustainable development of Dublin Port. We have identified a series of projects which will bring the Port to its ultimate capacity by 2040 and, in doing this, support the objectives of Project Ireland 2040.

“Achieving sustainability is a considerable challenge and we are committed in Dublin Port to doing that in the case of port operations. Critically, the Masterplan provides certainty on the ultimate extent and environmental impact of the Port.

“As we build more capacity on the same footprint in Dublin Port, we will continue to work to achieve a re-integration of the Port with the City. Next year, for example, will see construction start on a 4km greenway for pedestrians and cyclists on the northern fringe of the port overlooking the Tolka Estuary. In the meantime, work is continuing on the Alexandra Basin Redevelopment Project and on other projects and we will invest €132m in port infrastructure this year alone.”

The launch of Masterplan 2040 Reviewed 2018 comes as Dublin Port trade figures for the first half of 2018 show growth of 5.2% with increases in both imports and exports. In the high value unitised cargo modes, Ro-Ro freight increased by 4.6% to 508,000 units signalling the likelihood that volumes for the full year will pass the one million units mark for the first time. The port’s container volumes increased by 5.8% to 356,000 TEU.

Imports of new trade vehicles have increased substantially with nearly 63,000 units passing through the port in the first six months of the year, an increase of 11.7% year-on-year.

Tourism volumes are ahead with 2.7% growth bringing ferry passenger numbers to almost 800,000 in the first six months of the year. There has also been substantial growth in cruise calls with 64 cruise calls so far this year compared to 50 last year.

Commenting on the half year trade results, Eamonn O’Reilly, Chief Executive said: “We had budgeted for growth of 5.0% this year but are now running at the higher rate of 5.2%. At this level, by the end of 2018 we will have seen growth of 37% in just six years. This is significantly higher than our Masterplan planning growth rate of 3.3% and highlights the need for us to build additional port capacity at a faster rate. Where we had been planning to invest €600m in the decade to 2027, we now know we need to spend €1,000m if we are to continue to provide capacity for our customers.

“Our investments match those of the major shipping lines such as Irish Ferries, Stena Line and CLdN, all of whom have already or will shortly introduce new larger ships on services between Dublin and both the UK and Continental Europe.

“There is much commentary on BREXIT at the moment and we continue to work with State Agencies such as Revenue and the Department of Agriculture, Food and the Marine to ensure that essential border control and inspection facilities are in place for March 2019, for December 2020 or whenever they might be required, if at all.

“Critically, however, we have not allowed BREXIT and all its uncertainties to diminish our focus on the long-term plans for the development of Dublin Port.”