Sentinel Marine, the Aberdeen-headquartered operators of offshore support vessels, has taken delivery of the latest vessel to join its state- of-the-art fleet. The Bailey Sentinel, constructed in China is now en route to Aberdeen and is due to arrive in early September. Twenty four new jobs will be created when the Bailey Sentinel goes into service, bringing the total workforce at Sentinel Marine to 230. 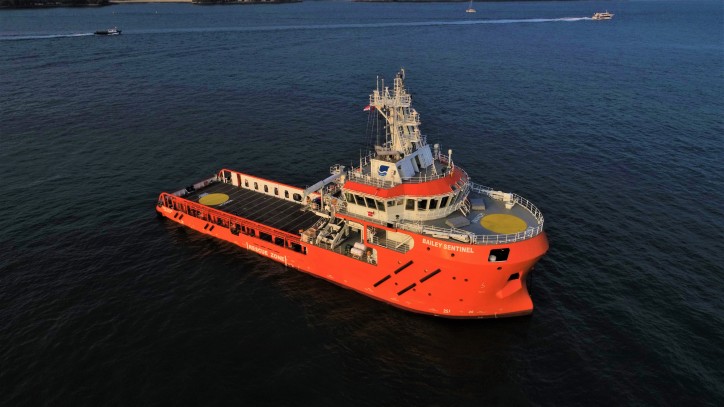 The Bailey Sentinel, an emergency response and rescue vessel (ERRV), will operate rescue and recovery services for a major North Sea oil field operator following sea trials. The vessel is the eighth new build vessel to join the expanding Sentinel Marine fleet since 2015. One further new vessel is set to be delivered in quarter one of 2019.

The Sentinel Marine fleet is the youngest operating in the emergency response and recue sector. The company’s new builds have an advantage over aging ERRVs in the North Sea fleet – many of which are converted fishing boats or supply vessels – in that they are more efficient to operate.

Rory Deans, chief executive of Sentinel Marine says, “We are delivering a quality fleet of ERRVs which, unlike some still in service in the North Sea, have not been repurposed but instead have been custom built to ensure they are equipped with the latest technology and are more fuel efficient. It is reckoned that over 30% of ERRVs currently operating in the North Sea are at least 30 years old. At Sentinel Marine we are committed to providing state of the art multi-role vessels which are able to provide a wide range of services including oil recovery, rescue towing and dynamic positioning.”

“It is also important to Sentinel Marine that we offer our staff a reliable, comfortable and modern environment to live and work in and that we continue to attract the best of the maritime industry’s talent.”

“By having the newest fleet in the sector,” continues Rory Deans, “We aim to keep attracting young talent like Frazer, who has just returned from his first trip to sea with us on the Mariner Sentinel which is operating within the Statoil’s Mariner oilfield to the east of Shetland.”