The first cruise ship from AIDA Cruises to use LNG is scheduled to leave the MEYER WERFT covered building dock on 21 August. 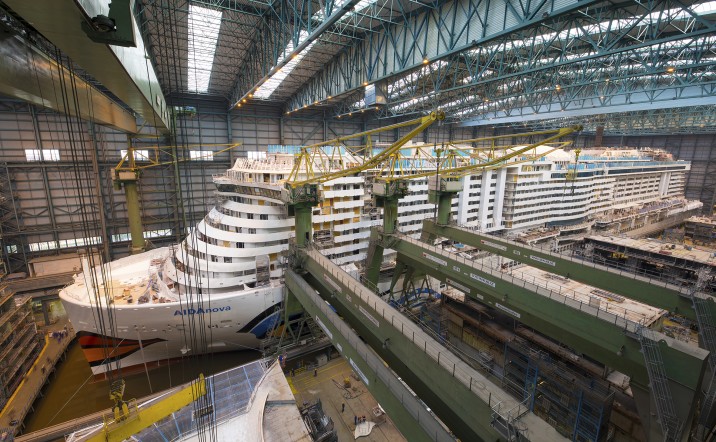 The AIDAnova (see also at CruiseMapper) is scheduled to leave the MEYER WERFT covered building dock II on Tuesday 21 August 2018.

The float out procedure is planned to commence at around 7.00 pm. However, weather conditions or production processes may result in delays or schedule changes.

Once the AIDAnova has left the building dock, the vessel will berth at the shipyard’s outfitting pier, where its mast and funnel cladding will be fitted. Until its passage along the river Ems to the North Sea, which is scheduled for the end of September, the ship will remain berthed in the shipyard harbour. While it is there, it will undergo further outfitting and work on its interior fittings, and further testing with LNG will be performed on the ship's engines; acceptance procedures by the ship owners will also take place. At the same time, the approximately 1,400 members of the ship’s crew will shortly be commencing their on-board training; the cruise ship will be welcoming its first guests on board in mid-November 2018, immediately after delivery.

All times are subject to weather conditions.

The float-out can be followed online by webcam at www.meyerwerft.de. The AIDAnova will have over 2,600 passenger cabins, with a gross tonnage of over 180.000, a length of 337 metres and a width of 42 metres.