The Vancouver Fraser Port Authority Tuesday released the 2018 mid-year statistics for goods moving through the Port of Vancouver, Canada. Overall cargo through the port increased 4.4 per cent to 72.1 million metric tonnes (MMT) over the same time last year to reach record mid-year volumes. 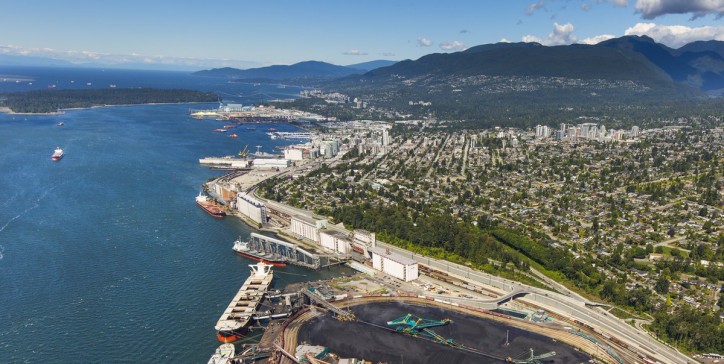 “This year’s record mid-year results for cargo movement show balanced, steady growth across most business sectors, demonstrating the increasing strength of the Canadian economy and the Port of Vancouver’s ability to handle Canada’s growing trade with Asia, despite general trade uncertainty,” said Robin Silvester, president and chief executive officer at the Vancouver Fraser Port Authority. “The Port of Vancouver’s ability to accommodate the most diversified range of cargo of any port in North America continues to be one of our greatest strengths and is a key factor that will enable us to continue to grow to meet Canada’s future trade objectives.”

Container volumes (measured in 20-foot equivalents or TEUs) increased by five per cent compared to mid-year 2017 to a record 1.64 million TEUs as a result of the growing demand for Canadian resources and products, and the increasing Canadian demand for consumer and manufacturing goods from Asia.

“Shippers continue to have confidence in the ability of the terminals, rail and shipping lines, truckers and other supply chain participants to handle the growing demand for goods shipped in containers,” said Silvester.

However, forecasts show that Canadian West Coast container ports will be full by the mid-2020s, so the port authority is working to create new capacity.

“We are partnering with our existing container terminals to expand and improve their operations,” said Silvester, “but even with these improvements, further capacity will be required, highlighting the need for the Roberts Bank Terminal 2 project, a proposed new three-berth container terminal that would provide the space needed to meet forecasted demand for trade of goods in containers.”

In other sectors beyond container trade, overall mid-year results show balanced growth, with increases in potash (23 per cent), autos (8 per cent), coal (9 per cent), forest products (4 per cent) and petroleum products (40 per cent) and declines in grain (-10 per cent), and chemicals and minerals (-5 per cent). The healthy overall growth highlights the continued confidence of port users, and the optimism of terminal operators who are investing to grow their operations.

“The long-term outlook for Canadian trade is one of growth, and all those who make up the Port of Vancouver are working hard to ensure we will be ready to handle the increased volumes through Canada’s West Coast,” added Silvester. “We’d like to thank our terminal operators, rail and trucking companies, government and other partners for their commitment to investments that are helping increase capacity and contribute to a more fluid and efficient supply chain. With these investments, combined with our focus on infrastructure development and sustainability, the Port of Vancouver is well-positioned to continue supporting Canada’s growing trade,” added Silvester.

Breakbulk cargo increased 14.4 per cent to 8.8 MMT compared to mid-year 2017, mainly attributable to a 21.1 per cent increase in domestic traffic.

Bulk dry cargo volumes increased 0.7 percent. Decreases in grain products including specialty crops and feed (-10.2 per cent) and minerals, ores and concentrates (-27.8 per cent) were offset by increases in coal (8.9 per cent) and potash (22.7 per cent).

Bulk liquid tonnage was up by 28.3 per cent over mid-year 2017 due to a strong 40.2 per cent increase in petroleum products.

Container quantities increased by 5.1 per cent to 1.64 million TEUs due to a stronger economy and solid export traffic.