Marked Recovery In Container Volumes At The Port Of Gothenburg

During the first six months of this year, container volumes at the Port of Gothenburg rose by 19 per cent, from 318,000 to 378,000 TEUs. The number of cars and intra-European ro-ro* units shipped increased by ten and four per cent respectively, whilst the energy segment fell by three per cent. The figures are taken from the Port of Gothenburg’s recently published mid-year volume report.

Recovery in the container sector
The vast majority of Swedish foreign trade takes place by sea. In the case of trade with countries outside Europe, it is most common for freight to be transported by container ship.

During the first six months of the year, 378,000 TEUs (Twenty-Foot Equivalent Units) were shipped, up 19 per cent on the corresponding period in 2017. The figure for the previous year was historically weak due to the labour dispute that at the time had a significant impact on customers’ willingness to use the port. 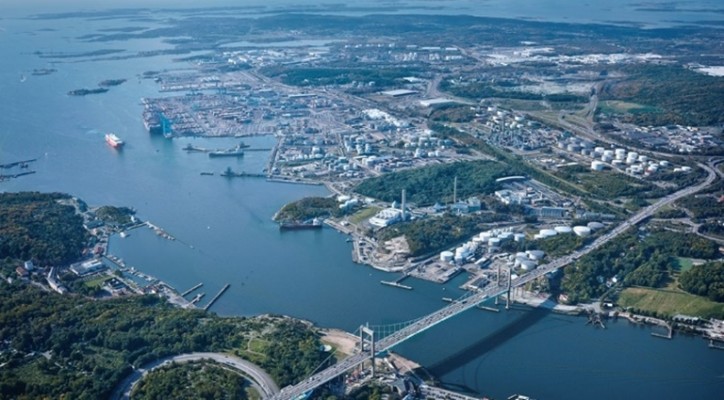 Swedish industry is doing well, which is apparent at the Port of Gothenburg. Container volumes increased by 19 per cent in the first six months of 2018. Photo: Gothenburg Port Authority.

More new cars passing through the port
The number of new cars handled at the port has increased year on year since 2013, and the positive trend looks set to continue with volumes up ten per cent for the first six months of 2018. Some 152,000 cars were shipped – the highest number in 10 years. As was the case previously, it is Volvo Cars’ highly successful model range that not only accounts for the majority of the motor vehicle throughput at the port but also the surge in new car sales in Sweden.

Intra-European ro-ro traffic continues to grow
Intra-European ro-ro traffic to and from the Port of Gothenburg comprises mainly forest products and input goods for the engineering industry. With 593,000 ro-ro units handled, 2017 saw an all-time high for this segment. The signs are that 2018 could be yet another record-breaking year with 305,000 units reported for the first six months, a rise of four per cent.

More energy products
Energy products continue to pass through the Port of Gothenburg at a high rate even if there has been a slight drop compared with the first half of 2017, which was the best period ever for the energy sector. A total of 11.7 million tonnes of energy products were handled during the first six months of this year, down three per cent on the record-breaking first-half figure for 2017.

The situation as it stands
According to Magnus Kårestedt, Gothenburg Port Authority chief executive, Swedish industry is thriving, and this is reflected in activity at the port. “Motor vehicle volumes are growing, and energy products remain at a high level. Although the container terminal has gone through a very testing period, the situation is looking brighter, with customers and volumes making a welcome return and with several new productivity records during the past six months. Whilst the trend is positive, the segment still has a long way to go before it is back where it ought to be.”

* Ro-ro stands for roll-on/roll-off and refers to trailers and other wheeled cargo carried on ships that operate in regular liner traffic within and outside Europe.
Source: Gothenburg Port Authority