Carnival Corporation & plc (NYSE/LSE: CCL; NYSE: CUK), the world's largest leisure travel company, and its AIDA Cruises brand, the leading cruise line in Germany, held a naming ceremony to welcome AIDAnova (see also CruiseMapper) into their fleet – which will debut with innovative guest experience features and as the world's first cruise vessel to be powered at sea and in port by liquefied natural gas (LNG), the world's cleanest burning fossil fuel. 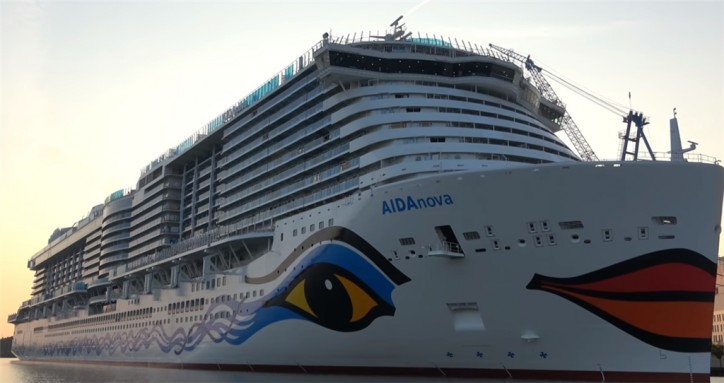 AIDAnova was named on Friday by Sonja (31) and Asad (33) Mirza and their children Sophia (2) and Adrian (3) of Hanau, Germany, who were selected from hundreds of applicants from all over Germany. Held at the Meyer Werft shipyard in Papenburg – the first naming of a cruise ship at the shipyard in more than 20 years – the celebration included a first-of-its-kind AIDA Open Air concert featuring a light show, fireworks display and live musical performance with superstar and two-time Grammy winner DJ David Guetta before a sold-out crowd of more than 25,000 with additional viewers tuning in via livestream.

"We are excited to introduce AIDAnova, the first ship of a new generation of vessels for AIDA Cruises that will help us further establish our position as a leader and pioneer in the cruise industry," said Roger Frizzell, chief communications officer for Carnival Corporation. "AIDAnova will provide our guests with among the best in culture, entertainment, sports, wellness and culinary delights, while helping maintain the popularity and growth of AIDA Cruises as the most popular cruise line in Germany."

AIDAnova marks an exciting new generation of ships for AIDA Cruises that combine innovative design with state-of-the-art technology to provide even greater onboard comfort and further enhance the guest experience. Expected to launch in November 2018, AIDAnova will have more than 40 different restaurants and bars on board to provide guests with an opportunity to enjoy a new level of world-class dining experiences and culinary trends.

AIDAnova will also make history as the world's first cruise ship to be powered in port and at sea by liquefied natural gas (LNG), the world's cleanest burning fossil fuel – an innovation that will reduce exhaust emissions to help protect the environment and support Carnival Corporation's aggressive sustainability goals. It is the first of 11 next-generation cruise ships from Carnival Corporation between 2018 and 2025 able to generate their power at sea and in port from LNG.

The LNG ships are part of Carnival Corporation's ongoing fleet enhancement strategy with 20 new vessels scheduled for delivery between 2018 and 2025 – creating excitement in the vacation market and helping the company's brands continue to exceed guest expectations while accelerating demand for cruising, the fastest growing segment in the vacation industry.

Guests can also enjoy versatile entertainment offerings, including the Beach Club and Four Elements adventure deck, complete with three water slides and a climbing garden under the dome of a retractable glass roof, in addition to a new escape room for thrill seekers, a 360-degree Theatrium and Studio X, the brand's first TV studio at sea.

Additional highlights include 20 different stateroom types, ranging from a two-deck penthouse suite to spacious family and patio cabins to comfortable single options with a balcony. The ship will also feature the Body & Soul Spa, spanning two decks and offering 80 treatments from around the world.

AIDAnova will embark on its first voyage at the end of September and will head for Eemshaven in the Netherlands. Once the ship has received its final fittings and has completed various sea trials, AIDAnova will be delivered to AIDA Cruises in an official handover ceremony from the Meyer Werft shipyard on November 15, 2018, in Bremerhaven, Germany. AIDAnova will begin its maiden voyage from Hamburg to the Canary Islands on December 2, 2018.

With its three new LNG ships on the horizon, AIDA Cruises continues to pursue its commitment to "green cruising" and sustainable operations. As of 2023, more than half of AIDA Cruises' guests will be spending their vacation on a cruise ship that runs on LNG. The use of LNG for ship power has a smaller carbon footprint and is the cleanest burning fossil fuel. In addition to pioneering the use of LNG for cruise ships, Carnival Corporation's world's leading cruise lines, including AIDA Cruises, have been industry leaders in utilizing exhaust gas cleaning systems (EGCS) in the small confines of a cruise ship. This is another environmental breakthrough that addresses concerns with sulfur compounds and particulate matter from exhaust. Carnival Corporation has nearly 70 of its over 100 ships outfitted with the systems.