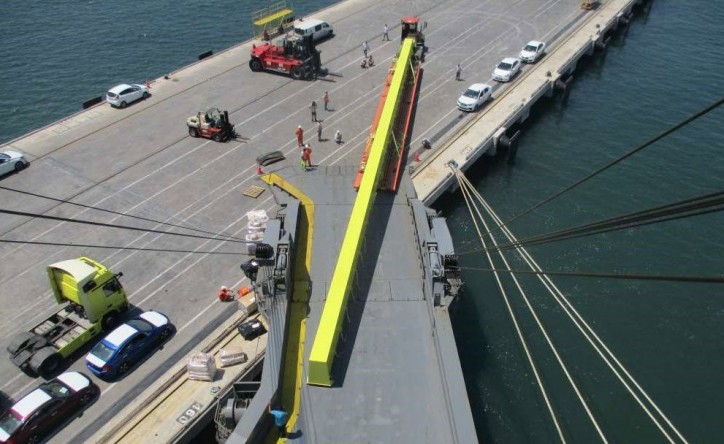 Transporting long out-of-gauge cargo is nothing new to Höegh Autoliners who frequently transport longer breakbulk units, such as trains and windmill blades. The difference this time was that the crane girder needed to be transported on a single rolltrailer.

Earlier this year, Höegh and Kuehne + Nagel successfully transported a 37 metre long crane girder from Borusan to Bahrain for the Alba Potline 6 Project. Adding another six meters in length, the 43 meter long breakbulk piece now pushed the limit to what is possible to ship on a single rolltrailer.

Einar Bassøe, Head of Global Cargo Operations says, “Our policy is to primarily use well known methods in order to keep the risk and complexity to a low level in all aspects of the cargo handling operation. As for this particular breakbulk piece, it could have been loaded with other methods, but by keeping it to the single rolltrailer concept we ensure a low risk operation in front of us.”

By using equipment that is well known in all ports around the world, the cargo operations team could rest assured that the stevedores on each side of the sailing would be comfortable with handling the long piece of cargo.

"Loading a 43 metre long breakbulk unit on one rolltrailer put Höegh’s Cargo Operation team to the test. When creating the drawings on how to stuff the rolltrailer, it became clear that if we would use our regular 80 feet rolltrailer, the bogies would be in front of the cargo’s centre of gravity. This would result in too heavy load on the front wheel and the cargo would tip.

The solution was to use Höegh’s 80 feet rolltrailer with modified bogies. The wheels of these rolltrailers are located further to the back, to facilitate both the location of the weight and to reduce the impact of extreme over-length like in this case."

Einar says: “When the issue with the centre of gravity was solved, we had to ensure safe margins. We calculated the maximum inclination of the stern ramp in both load and discharge port with respect to draft and tidal conditions. Based on this, the required height above the ground the girder was calculated carefully in order to safely pass over the inclined ramp, and then on board the vessel.”

Detailed drawings and instructions were sent to the terminal in Borusan, detailing the process of how to stuff and secure the cargo correctly. In addition, Höegh Autoliners’ own Port Captain was also present to supervise the operations.

With everything in place, the girder was safely loaded on board Höegh Berlin ready for its sea transportation to Bahrain.

Einar says: “The successful operation was made possible thanks to the great teamwork across our cargo operation teams and the detailed planning involved. This ensured that the solution worked exactly as planned and shows that we are ready to push our boundaries every day for our customers.”