Inge Sijbesma, wife of the CEO of DSM, is naming patron // The “Al Jmeliyah” will link Europe with the Far East // The ship is technically equipped to use LNG fuel

Tuesday, the 15,000 TEU ship "Al Jmeliyah" was officially christened in Rotterdam. Naming patron is Inge Sijbesma, the wife of Feike Sijbesma, CEO of the corporation DSM – one of Hapag-Lloyd’s biggest customers in the Netherlands. The name “Al Jmeliyah” is Arabic for “the beautiful one.” With its ten sister vessels, the “Al Jmeliyah” numbers among the so-called “Ultra Large Container Vessels” in Hapag-Lloyd’s fleet. 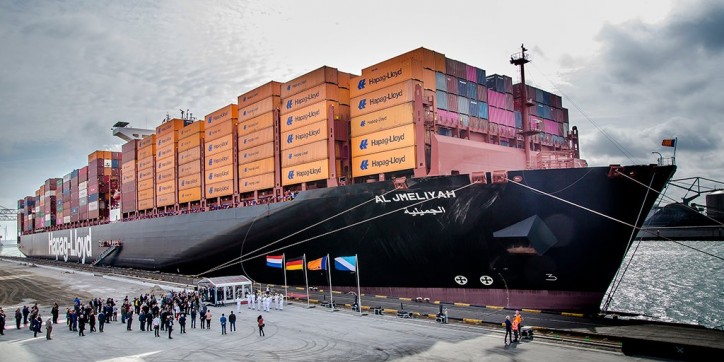 However, this was not the first time that Hapag-Lloyd has christened a ship in Rotterdam. The most recent one was the christening of the “Rotterdam Express” in 2000.

“With its 4,890 TEU, it was enormous for the time,” said Hapag-Lloyd CEO Rolf Habben Jansen. “Less than 20 years later, we are christening a ship here that is three times as big. This illustrates the huge changes in our industry in terms of capacities and technologies.”

“We are very proud to be hosting this naming ceremony in the ECT Delta terminal, as it attests to the close relationship we have with Hapag-Lloyd,” said Leo Ruijs, CEO of Hutchison Ports ECT Rotterdam. “This relationship now stretches back almost 50 years. The first Hapag-Lloyd ship docked here in October 1968.”

Rotterdam is the largest port in Europe. Hapag-Lloyd offers 19 services to and from Rotterdam from the Far East, South America, Australia, the United States, Pakistan, India, South Africa, the Caribbean and Scandinavia, thereby providing its local customers with a truly global network. Fifty vessels in Hapag-Lloyd’s fleet call at the port, and the liner shipping company handled more than 424,000 containers in Rotterdam in 2017.

The “Al Jmeliyah” was built in 2016 for the United Arab Shipping Company (UASC), which merged with Hapag-Lloyd in May 2017. The ship is 385.5 meters long and 51 meters wide. In addition, it is one of Hapag-Lloyd’s 17 so-called “LNG-ready” ships that are technically equipped to use liquefied natural gas. It was manufactured by Hyundai Samho Heavy Industries in South Korea.

The “Al Jmeliyah” operates in the FE4 service, the Far East 4 loop. Departing from Rotterdam, it sails to Hamburg, Antwerp, Southampton, Yantian, Shanghai, Busan, Ningbo, and Shanghai before heading back to Europe.