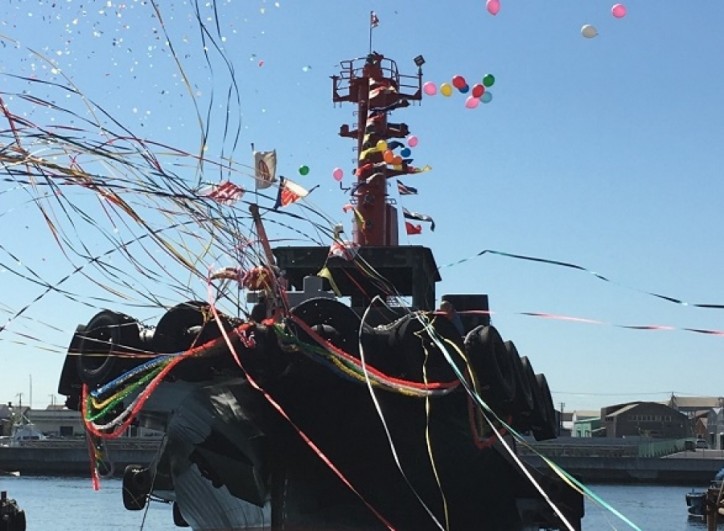 The tugboat was named Ishin after the name of MOL's technology development project, the "ISHIN NEXT - MOL SMART SHIP PROJECT –. " Ishin, slated for delivery in February 2019 after the completion of outfitting work, will be the first LNG-fueled tugboat serving Osaka Bay starting in April.

In addition, Ishin's excellent environmental performance – including an estimated 25% reduction of CO2 emissions in comparison to tugs that run on A fuel oil – earned the top rating of four stars from the Ministry of Land, Infrastructure, Transport and Tourism's energy-saving rating scheme for Japan's costal ships. The scheme aims to "visualize" energy savings and the effects of CO2 reduction in the vessel planning and design stages and objectively evaluate ships' energy-saving and CO2 reduction performance to foster the development of coastal ships that offer greater energy saving and CO2 reduction.

Ishin is the first LNG-fueled tugboat owned by MOL. Powered by Yanmar Co., Ltd.'s latest two dual-fuel commercial marine engines 6EY26DF with the ability to use both A fuel oil and LNG from, it will be the first LNG-fueled tugboat in Japan conforming to the International Code of Safety for Ships using Gases or other Low-flashpoint Fuels (IGF Code), aimed at ensuring the safety of LNG-fueled vessels. The code regulates safety requirements for vessels that run on gas and low-flashpoint fuels, that took effect on January 1, 2017. It is also Japan's first LNG-fueled tugboat with a removable LNG fuel tank mounted on the exposed deck at the stern of the ship. This enhances convenience in bunkering, maintenance, and inspection.

Ishin will be operated by Nihon Tug-Boat Co., Ltd., and LNG fuel will be supplied by Osaka Gas Co., Ltd. using a truck-to-ship system. MOL and Osaka Gas will establish an LNG fuel supply system for vessels in Sakai Senboku Port, which will be the first in Osaka Bay.

MOL takes a proactive stance in promoting spread of LNG fuel to meet the needs of customers and society alike to reduce the environmental impact of vessel operation. Through the operation of Ishin, which has an excellent balance of high-speed sailing and environmental performance, the company looks forward to spurring the development of LNG fuel supply systems in Japan and overseas.