This year, MOL's FLEXIE won the award for the first time in nine years as the only winner from the shipping industry.

Judges highly evaluated the design, saying. "It's great that the FLEXIE realized unconventional innovation as an outcome of re-defining the car carrier. It's notable that the space onboard the vessel was rearchitected using the design concept. Flexibly liftable decks allow loading of vehicles with different heights. As a result, loading efficiency was improved by 6.25% from the conventional type of car carrier, and this enables the vessel to meet new transport needs. Another point-the FLEXIE realized accuracy and a high level of safety by adopting augmented reality (AR) and latest IoT technology in its operational system." 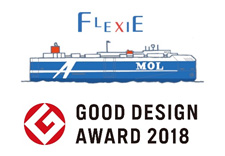 The FLEXIE series' hull design boldly presents the letter "A", representing the global brand of MOL Auto Carrier Express (MOL ACE), and a white line, which expresses the company's determination to connect its long history of customer service to the future in a seamless manner. As of October 3, 2018, two vessels in the series are in operation, and the number is to increase to four by March 2019.

MOL continually provides high-quality car carrier services with the aim of becoming the world leader in safe operation and protecting the environment, with MOL's state-of-the-art fleet, which adopts the new design to meet demands for transport of not only completed cars, but also diversified cargoes such as construction machinery and railway vehicles under its MOL ACE global brand of car carrier transport service.

The functional design represents a dramatic rethinking, for example, by increasing the number of liftable decks to six from two on conventional carriers, to meet diversified transport demand. In addition, the hull design marks a sharp contrast to conventional car carriers, and boldly features the letter "A," representing the MOL ACE global brand, and a white line, which expresses the company's determination to connect its long history of customer service to the future in a seamless manner.

"From Hull to Engine Creating an Eco-friendly Ship with Advanced ECO Technology."

The FLEXIE series vessels adopt an array of advanced environmental technologies, which were developed in the MOL Group research and technology project, "Senpaku ISHIN project," successfully achieving a reduction of 13.7% in CO2 reductions compared to conventional vessels.