On Tuesday 16 October, a bunkering operation involving Liquefied Natural Gas (LNG) from trucks to a sea-going vessel was successfully completed in North Sea Port. Resupplying a ship with this cleaner maritime fuel contributes to North Sea Port's objective of reducing total emissions in the port. 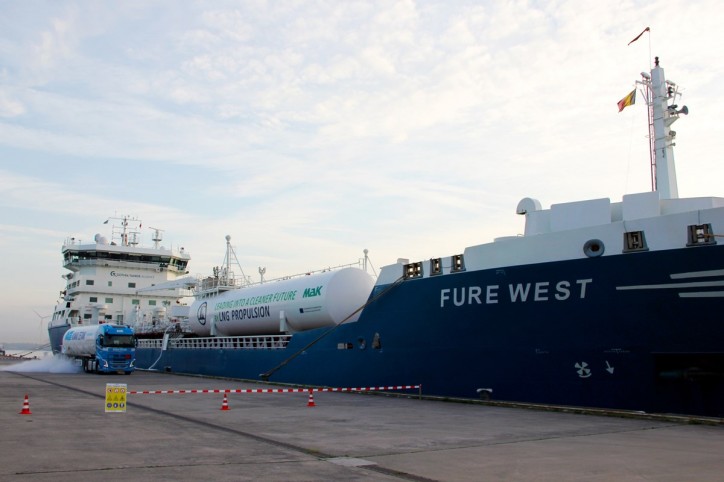 This is the first bunkering operation on this scale to take place in North Sea Port and builds on previous initiatives within the port. The 'Truck-to-Ship' bunkering operation was carried out at Kluizendok in Ghent, with LNG being pumped to the sea-going vessel Fure West from trucks on the quay. The ship was supplied by 8 trucks carrying about 19 tons of LNG each, a total of over 150 tons of LNG. The trucks collected the LNG from Rotterdam and Zeebrugge.

The bunkering service was provided by Titan LNG, a leading supplier of LNG for ships and industrial applications in north-western Europe. The Fure West, a tanker with a length of 144 m, is owned by the Swedish shipping company Furetank. This company is a pioneer in the field of LNG-powered ships. Last weekend, the ship unloaded bulk liquid at OilTanking Ghent.

All parties were very positive about the collaboration between the North Sea Port authority and the firm Titan LNG.

Jippe van Eijnatten of Titan LNG: "Because the ship does not always know where it is going to be working, it is important to be able to move quickly to arrange bunkers in different places. The communication with North Sea Port was very smooth and we were very pleased with the cooperation provided, which led to a safe and efficient bunkering operation."

LNG in the future

The aim is for bunkering with LNG to become more routine in North Sea Port in the future. According to Jan Lagasse, CEO of North Sea Port, this will increase the attractiveness of North Sea Port to shipping and significantly reduce emissions of CO2 and nitrogen oxides. Both aspects are also listed in the Strategic Masterplan of the newly merged cross-border port authority and is consistent with achieving European climate targets. North Sea Port is investigating further opportunities for LNG bunkering using the 'Ship-to-Ship' method.

LNG (liquefied natural gas) is natural gas which is liquefied by cooling it to -162 °C. At this temperature and atmospheric pressure, the gas condenses to a liquid. As a result, LNG takes up 600 times less volume than natural gas in gaseous form and it can be transported and stored and more easily and therefore more economically. LNG as shipping fuel emits 20% less CO2 and almost no NOx, SOx and particulates - in comparison to oil based fuel.