This major project milestone involved the vessel being launched into the water for the first time, and follows the successful roll-out and joining of the hull and superstructure in August. The vessel is now undergoing final preparations to begin sea trials as part of the acceptance and handover process. 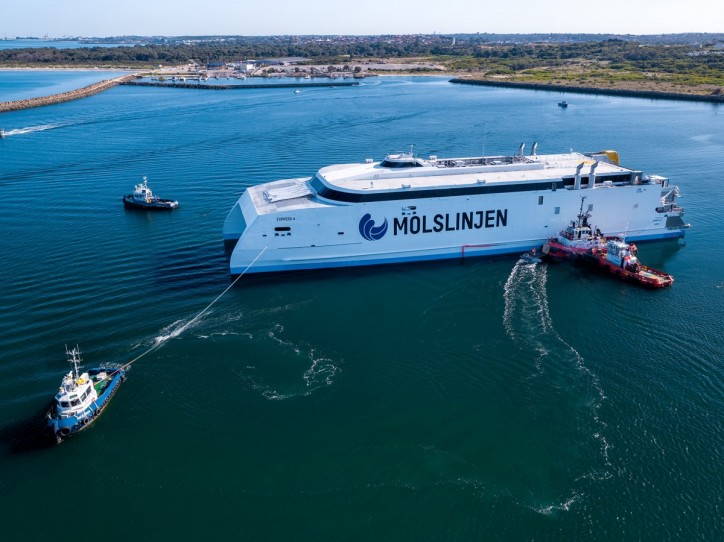 This next-generation catamaran commenced construction in April 2017, and remains on schedule to meet contract handover date in Jan 2019. The ‘Express 4’ features an advanced optimised hull form designed to minimise fuel consumption. Also built into the vessel is Austal’s industry-leading Ride Control System, which will result in superior sea-keeping and comfort for over 1000 passengers traveling at speeds up to 40 knots.

“The technology and efficiency of this vessel truly places it in a class of its own - it has really redefined what is possible in high speed aluminium vessel design” Austal CEO, David Singleton said.

“The international demand for Austal vessels in both commercial and defence markets is testament to the Austal team continually developing the world’s most advanced vessel designs and then building them to the highest possible standard” he said.

“This is a record sales period for international high speed ferries and Austal is clearly leading the market with our highly differentiated and unique designs. With demand continuing to increase we have cemented the company’s largest forward order book and are continuing to add to it” he said.

The ‘Express 4’ was designed at Austal’s centre for excellence in maritime design, and has supported more than 450 direct jobs in Henderson, Western Australia and more than 500 indirectly through Austal’s 1100+ Australian supply chain.