Gothenburg-based shipping company Terntank was the very first operator to take on liquefied gas at a new bunkering facility at the Port of Gothenburg. Not only liquefied natural gas, LNG, but also liquefied biogas, LBG. 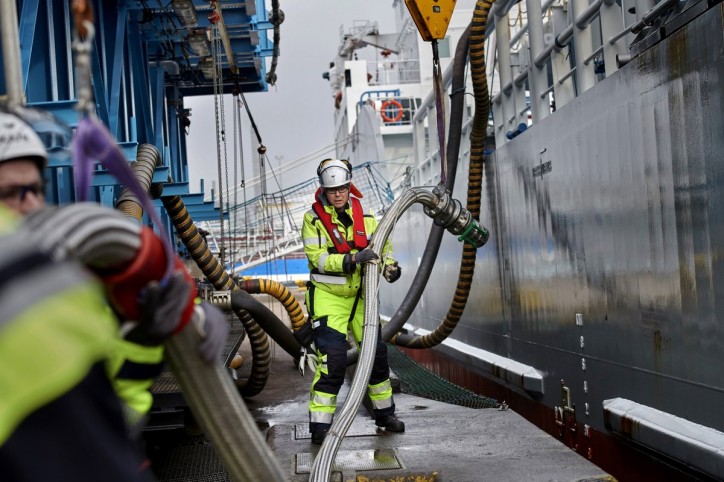 “Being able to offer this unique opportunity represents a major breakthrough, not only in facilitating the transition to LNG, but also in gradually increasing the proportion of renewable gas,” said Johan Zettergren, Chief Executive of Swedegas, which owns and runs the facility.

With liquefied natural gas, LNG, as a marine fuel, shipping is about to take a major step forward in the transition process, breaking away from its reliance on oil and moving boldly towards more environmentally smart alternatives. LNG is currently the cleanest marine fuel available due to its low emissions.

The facility is the only one of its kind in Sweden. Designed from the very outset to handle both LNG and LBG, which in terms of chemical composition are largely identical, makes the new facility flexible to meet the transition of the shipping sector.

“LNG is the first step. The ambition to increase the volume of biogas has taken a new turn, as this technology and related infrastructure work equally well for both gases,” said Tryggve Möller, CEO of Terntank Ship Management, which has invested in LNG-powered vessels chartered by NEOT. “We are delighted to be working with companies that are driving the industry forward and with a firm focus on promoting clean shipping."

The LNG and LBG that was bunkered at the facility was supplied by the Norwegian company Barents NaturGass, which has long, solid experience of gas distribution.

“We are looking forward to being part of this unique concept where we can offer customers both LNG and LBG,” said Gudrun Rollefsen, CEO at Barents NaturGass.

The LBG was produced by FordonsGas at its facility in Lidköping north of Gothenburg.

“A green energy wave is gathering momentum in the marine sector, and we are looking forward to being part of this pioneering venture and continuing our close and fruitful collaboration,” said Emil Glimåker, FordonsGas Chief Executive.

The facility is the first in Sweden that allows tankers to bunker from a fixed pipeline as they load and discharge, reducing the turnaround time considerably. In 2015, the Port Authority introduced an environmental discount on the port charge as part of a drive to increase the number of calls by vessels powered by LNG.

“The discount has been a strong contributing factor behind many companies switching to LNG. In our endeavour to sustain this trend, we decided to extend the discount period by a further two years to 2020,” said Jill Söderwall, Vice President Business Area Energy at the Port of Gothenburg.

Sweden has already today one of the world’s most climate-smart merchant fleets and is set to lead the way in the expansion of green shipping.  LNG and LBG will play a major role in the transition.

“It is my firm belief that gas suppliers will come to realise the importance of the shipping sector as a gas user.  Access to renewable gas will increase, opening up new and exciting opportunities. Every step we take towards more sustainable transport is vital,” said Johan Zettergren.