On 11 December 2018 the Arctic LNG carrier Christophe de Margerie, owned and operated by Sovcomflot, loaded the first batch of liquefied natural gas (LNG) produced at the third train of Yamal LNG plant, at the Port of Sabetta on the Yamal Peninsula. 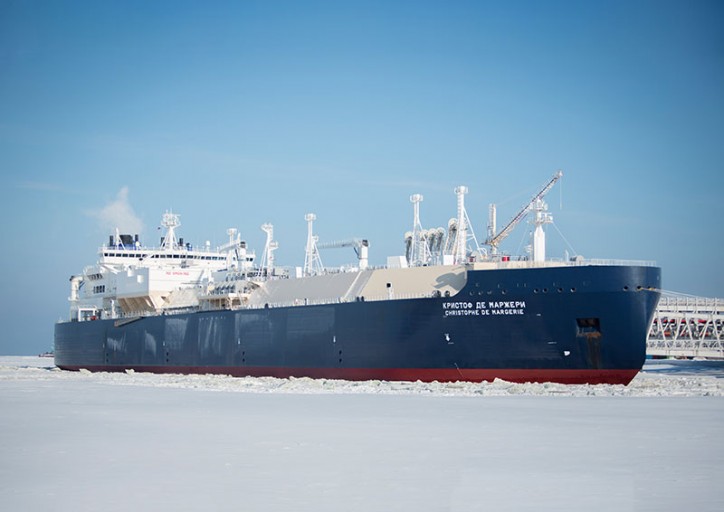 Dmitry Medvedev, the Russian Prime Minister, initiated the start of cargo operations via a video conference with the vessel’s Master Sergey Zybko.

Dmitry Medvedev congratulated Yamal LNG on reaching full production capacity and noted: “This is a significant milestone for the entire Russian gas industry and, of course, for our international partners, and for international cooperation in the energy sector. For half a century, our country has been successfully cooperating with its European neighbours in the natural gas sector; now we are making forays into Asian markets. Yamal LNG is a significant confirmation of the reliability of our partnership with other states – in this case, with France and China. It is also important that Yamal LNG will stimulate the development of transnational infrastructure, initially of the Northern Sea Route – the transport corridor connecting Europe and Asia. I am confident that participation in this project, now completed in the Russian Arctic, and in a number of other major projects, opens up great opportunities for our foreign partners.”

Commenting on the Sabetta ceremony, Evgeny Ambrosov said: “Over many years of successfully operating in the Arctic and Subarctic seas, Sovcomflot has trained over 50 highly qualified vessel crews, which is 1,500 seafarers capable of performing challenging work in extreme high latitude environments, to high safety and quality standards. We have a lot of seafaring dynasties amongst our crews, and we work to carefully preserve and carry on the legacy of generations of Russian seafarers, true pioneers of the Arctic.”

Christophe de Margerie is an icebreaking LNG carrier ordered, designed and built for Sovcomflot to transport LNG for Yamal LNG year-round in the challenging ice conditions of the Kara Sea and Gulf of Ob.

The vessel is capable of sailing independently through ice of up to 2.1 metres thick. She was assigned an Arc7 ice class, the highest amongst existing merchant vessels. The power capacity of Christophe de Margerie’s propulsion system is 45 MW, a capacity comparable to that of a modern nuclear icebreaker. The propulsion system includes three Azipod units, which provide a high ice-breaking capability and manoeuvrability. Christophe de Margerie became the world’s first merchant vessel with a high ice class to have three Azipod units installed.

Christophe de Margerie can sail unassisted along the Northern Sea Route westward from Yamal all year-round, and eastward for six months of the year (from July to December) to the ports of Asian-Pacific Region (APAC) countries. Previously, the summer navigation window in the eastern area of the Northern Sea Route was limited to only four months with icebreaker support.

In December 2017, Christophe de Margerie has safely transported the first cargo of LNG produced at Yamal LNG plant. Up until now, the vessel has completed 16 voyages for Yamal LNG and delivered 1.2 million tonnes of LNG.

In August 2018, the first cargo of LNG from the second Yamal LNG train was also transported by a Sovcomflot vessel – the LNG carrier Pskov.