The P1 platform awarded from a Norwegian energy company Equinor set to sail from SHI’s Geoje shipyard on Dec. 18

Samsung Heavy Industries (SHI) announced on Dec. 18 that it has successfully completed the processing platform (P1) for Johan Sverdrup Field development and delivered it to Equinor according to the scheduled delivery date stated in the original contract. 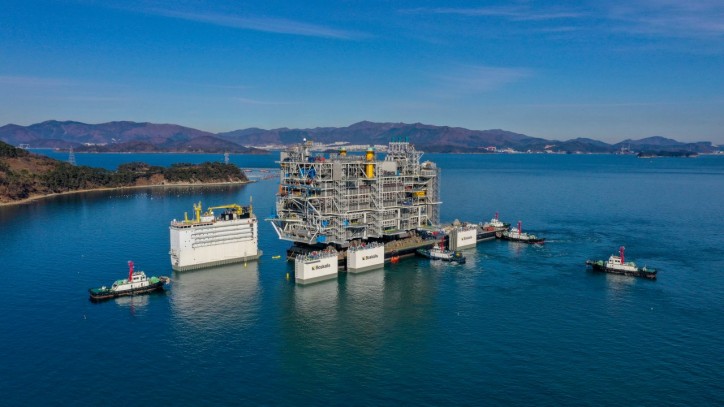 Reflecting the ‘Lessons Learned system’ developed from its previous experiences in large-scale offshore projects such as Shell Prelude FLNG, Egina FPSO, etc., SHI has been able to minimize potential risks in advance, enabling successful on time delivery of the error-free, quality platform.

Moreover, SHI has gained positive comments from Equinor on its safety management by achieving 16 million safe man hour without any serious incidents.

The P1 platform leaving the SHI yard today will arrive at Stord, Norway for installation of Deck crane, and then arrive at the Johan Sverdrup oil field in the North Sea, about 140 Kilometers west of Stavanger, Norway during the spring. When fully integrated and commissioned, the P1 platform is expected to produce and refine up 440,000 barrels of oil each day.

“I am very happy to be able to deliver the significant offshore facility with perfect quality without any delay which will be used for the large-scale Johan Sverdrup development project in the North Sea” says an official from Samsung Heavy Industries, “SHI’s differentiated project execution capabilities together with trust and teamwork built between Equinor and SHI make it possible to fabricate the platform without any HSE incidents and quality issues for a short construction period.”

It is highly likely that thanks to the successful completion of the Johan Sverdrup P1 platform, SHI will receive more orders for offshore facilities to be operated in the North Sea in the future.