The Coast Guard response continues to the grounding of the 308-foot Chinese-flagged commercial fishing carrier Ou Ya Leng 6 on Taka Atoll in the Marshall Islands. 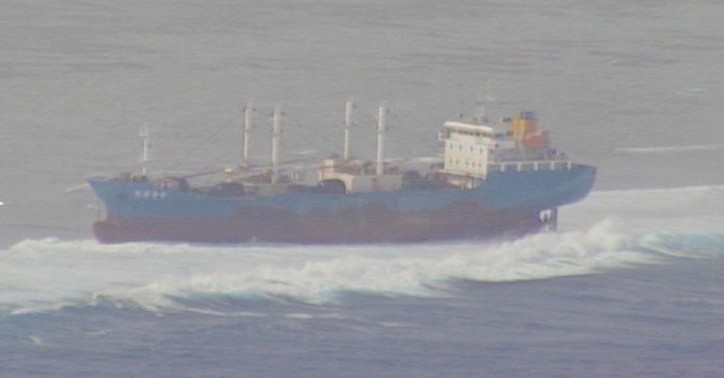 A Coast Guard HC-130 Hercules crew arrived and made contact with the mariners who remain aboard the vessel and are awaiting rescue.

Initial reports from MRCC China stated the crew abandoned ship and were on the atoll, but upon arrival, the Hercules crew confirmed they are aboard the vessel and using emergency generator power. There are no reports of injuries or pollution.

Two fishing vessels are en route and expected to arrive Thursday. The Republic of the Marshall Islands has also dispatched their patrol vessel Lomor to respond.

It is unknown at this time the cause of the incident, the nationality of the crew and disposition of any cargo or fuel.

“Our first concern continues to be for the 24 crew on the vessel, and we are working with our partners to effect a rescue,” said Brendon Ritz of JRCC Honolulu.

The Hercules crew came from Wake Island where they were previously involved in the Sincerity Ace case since Monday. Their home base is Coast Guard Air Station Barbers Point in Hawaii.

The Ou Ya Leng No. 6 is reportedly a fish carrier targeting squid in the Western and Central Pacific Fishing Commission area now aground in the territorial waters of the Republic of the Marshall Islands.

Taka Atoll, also known as Toke Atoll, is a small, uninhabited coral atoll in the Ratak Chain of the Marshall Islands and is roughly triangular made up of six small islands with an area of less than a square mile and lagoon in the center. Around 400 people inhabit nearby Utirik Atoll. The Republic of the Marshall Islands is located near the equator and slightly west of the International Date Line. Its total population of about 53,000 people live across the nation’s 29 coral atolls with Majuro as the capital.