SCA Logistics is firmly established in Kiel; 500th ship clearance in the Port of Kiel and at the Kiel-Canal

SCA Logistics moved its activities to the Ostuferhafen in Kiel 2 ¼ years ago, after the company had started its German operations in Hamburg 52 years ago and most recently continued them in Lübeck. The third terminal outside Sweden, alongside Rotterdam and London, has now firmly and successfully established itself in Kiel. 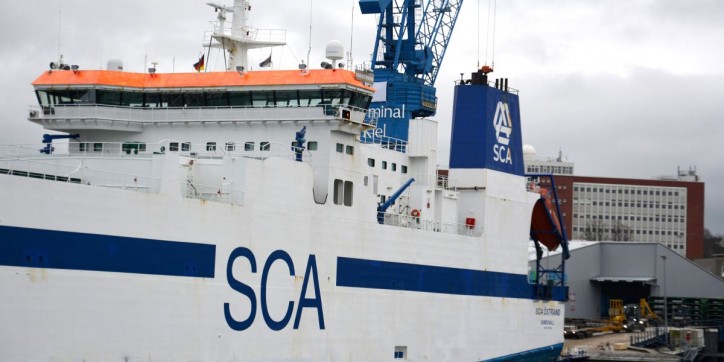 “We are pleased that we were able to win our Lord Mayor Dr Ulf Kämpfer and the President of SCA Sourcing & Logis-tics AB, Magnus Svensson to unveil our new SCA logo on the quay crane on the occasion of the 500th SCA clearance of a SCA vessel in Kiel and in the Kiel-Canal", explained Jörn Grage, Man-aging Director of SCA Logistics GmbH Kiel.

“SCA´s aim is to clearly express its solidarity with the city of Kiel, the port and the Kiel Canal. The close situation to the Kiel-Canal fits perfectly into our liner setup of SCA's own container ship and RoRo fleet. In Kiel, we were also able to complete our own network of shipping agencies in Germany, which we have operated in the North Sea and Baltic Sea for decades", explained Magnus Svensson, President of SCA Sourcing & Logistics.

Mayor Dr. Kämpfer confirms: “The establishment of SCA Logistics is a great success for Kiel. I am very pleased that this internationally renowned company has found a home in Kiel."

After initial investments of approx. 25 million euros in 50,000 square metres of Shed space and equipment, SCA's volume forecasts for the port have been met. The workforce of SCA Logistics GmbH has been increased by more than 50 % since 2016 in order to cope with the volume development. With the additional jobs created by the business at the Kiel seaport, more than 70 employees are now involved in paper handling at the Ostuferhafen. A total of approx. 800,000 tonnes of forest products for newspapers, magazines, packaging or hygiene products are handled and distributed to Europe and overseas - and the trend is rising.

Magnus Svensson: “SCA expects its exports from Sweden to continue to develop positively. This is not at least due to the doubling of pulp production capacity, which was completed in the summer of 2018 and will now amount to 1 million tonnes. If the products are distributed to Western Europe and overseas, this can also have a positive impact on traffic in the Kiel-Canal.“

For SCA, the canal lies on an important shipping route from the Swedish east coast to the world. From there, the SCA Logistics Group distributes more than 3 million tonnes of forest products annually by sea in its own system and almost 6 million tonnes via the 5 European terminals.

SCA welcomes from the perspective as an industrial company as well as a shipowners that the capacities of the canal shall be rapidly be extended by the ongoing reconstruction projects, so that the canal becomes a reliably partner to shipping companies in the future again.. An efficient canal is urgently needed for further growth. SCA is pleased with the 6-lane release of the A 7, which has led to traffic disruptions in the hinterland over the past two years, particularly in container traffic with Hamburg. The completion of the A 21 is also a pleasure - SCA now has two ways to cross the Elbe in Hamburg. All that is missing is the third crossing of the Elbe in the course of the A 20, a project that is urgently needed for Scandinavia and northern Germany. On the rail side, SCA feels well positioned in Kiel. Having the Intermodal Terminal on the site is a strength for the future. In addition, SCA welcomes the development around the demo-lition of the former grain sheds on the Eastbankport.

Dr Dirk Claus, Managing Director PORT OF KIEL: “The new improved gate situation creates additional pre-storage areas for Lorries and helps to further optimize the processes." In the medium term, SCA looks forward to the future expansion potential after the new gas-fired power plant is in service and the rededication for port handling of the area of today's Kiel coal-fired power plant.