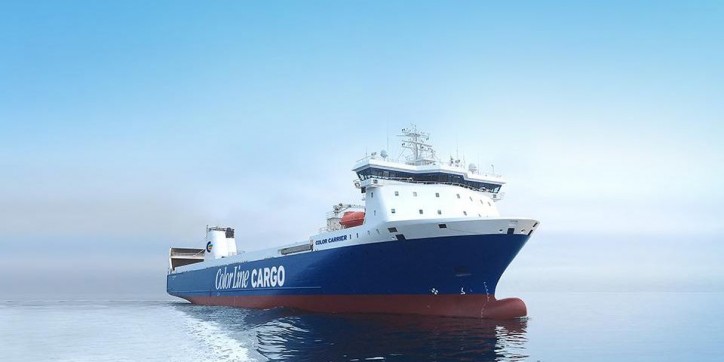 On the occasion of its inaugural call, the Lord Mayor of Kiel, Dr Ulf Kämpfer, PORT OF KIEL Managing Director Dr Dirk Claus and the Executive Manager of Sartori & Berger, Jens Broder Knudsen, welcomed the captain of the “Color Carrier”, Nils Sivertsen”, to the capital city of Schleswig-Holstein and handed over the traditional inaugural plaques during the onboard reception.

Lord Mayor Kämpfer: “I am very happy about Color Line expanding its capacity on the only direct ferry route between Germany and Norway. It strengthens Kiel as a port location and also facilitates the eco-friendly hinterland transport by rail.” As of now, the additional freight ferry offers three round trips a week complementing the daily departures of the large passenger ferries. Hence, there are 10 departures per week and direction to choose from on this route. Jens Broder Knudsen: “Color Line expands the eco-friendly cargo transport between Germany and Norway. Shifting traffic from road to sea is considered a high priority in Norway as well as in the EU.”

The “Color Carrier” is 154.50 m long, 22.70 m wide and has a draught of 6.95 m. It has a load capacity of 1,775 lane metres. All sorts of rolling cargo such as trucks, trailers and containers on flats or also construction and agricultural machines are accepted. Furthermore, the vessel carries products of the automotive industry as well as temperature-controlled and classified goods as per IMDG-code.

The ship was built in Norway in 1998, has a speed of 20 knots and an ice class. Dirk Hundertmark: “The “Color Carrier” was fitted with the latest generation of exhaust gas emission scrubbers two years ago. After some conversion measures, it will also be able to utilise the future onshore-power supply plant in Kiel.”

The “Color Carrier” can transport up to 120 cargo units per crossing, so increasing the transport capacity on the Kiel – Oslo route by up to 36,000 cargo consignments a year. Dirk Claus: “The freight ferry is an additional growth momentum for the port of Kiel and enables the resumption of intermodal transhipment at the Norwegenkai terminal. The aim is to tranship as much cargo as possible via rail.”

At the beginning of the year, the Norwegenkai was integrated into the schedule of the Hamburg-Billwerder shuttle operating from Mondays till Fridays, which reaches all national combined transhipment stations overnight. Cargo units arriving by train from the opposite direction are transhipped onto the freight carrier to Norway on the same day.

The Norwegenkai has two berths that are equipped with a hydraulic roro-ramp each. In order to ensure smooth handling processes for the additional cargo units, the operating area on the Norwegenkai terminal has been expanded by 10,000 m2 already some time ago.

Dirk Claus: „The PORT OF KIEL has currently invested another 1.5 million Euros in the infrastructure.” The row of fenders has been modified and another storm bollard has been installed. In the area of the track system, surfaces have been adapted, ISPS fences and gates have been relocated and trailer spaces have been newly marked. At the same time, the stevedoring contractor of Color Line, the firm of Sartori & Berger, has invested 1 million Euros in new tug-masters and reach-stackers. In future, the “Color Carrier” departs from Kiel every Tuesday, Thursday and Saturday at 7 p.m. and arrives in Oslo the following day at 4 p.m. The large passenger ferries “Color Magic” and “Color Fantasy” continue to cast off daily from Norwegenkai at 2 p.m. to arrive at the Norwegian capital at 10 a.m. on the following day. Color Line carried about 1.1 million passengers and more than 750,000 tons of cargo on the route Kiel - Oslo last year.