US Coast Guard’s only heavy icebreaker arrives at Antarctica

The 150 crewmembers of the U.S. Coast Guard Cutter Polar Star arrived Thursday in Antarctica along with a resupply vessel during Operation Deep Freeze – a joint military service mission to resupply U.S. interests in Antarctica. 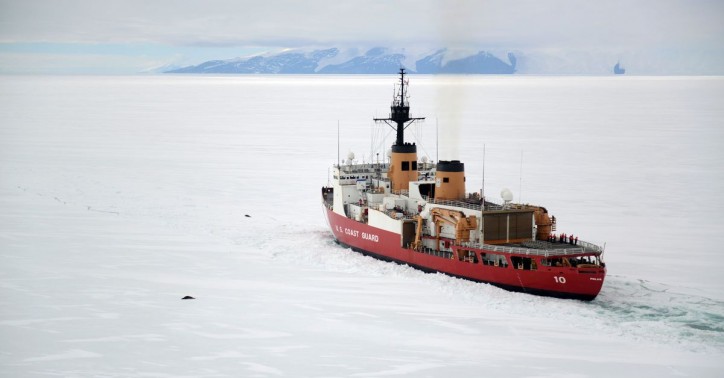 Homeported in Seattle, the 42-year-old Coast Guard cutter is the United States’ only operational heavy icebreaker, and the crew is making their sixth deployment in as many years to directly support the resupply of McMurdo Station – the United States’ main logistics hub in Antarctica.

Operation Deep Freeze is a joint military service mission in support of the National Science Foundation – the lead agency for the United States Antarctic Program. Since 1955, U.S. Indo-Pacific Command has assisted in providing air and maritime support throughout the Antarctic continent. This year marks the 63rd iteration of the annual operation.

Each year, the Polar Star crew creates a navigable path through seasonal and multi-year ice, sometimes as much as 21-feet thick, to allow a resupply vessel to reach McMurdo Station. The supply delivery allows Antarctic stations to stay operational year-round, including during the dark and tumultuous winter.

The 399-foot, 13,000-ton Polar Star arrived after completing an 18-mile trip through the ice to McMurdo Sound, where 400 containers will be offloaded from the supply ship Ocean Giant.

Presently, the U.S. Coast Guard maintains two icebreakers – the Coast Guard Cutter Healy, which is a medium icebreaker, and the Polar Star. Protecting national interests in the Polar regions is essential to ensure the Coast Guard’s national defense strategy and search and rescue capabilities are ready for action, but in order to do so, the icebreaker fleet requires modernization.

The ship also experienced a leak from the shaft that drives the ship’s propeller, which halted icebreaking operations in order to send scuba divers in the water to repair the seal around the shaft. A hyperbaric chamber on loan from the U.S. Navy aboard the ship allows Coast Guard divers to make external emergency repairs and inspections of the ship’s hull.

If a catastrophic event, such as getting stuck in the ice, were to happen to the Healy in the Arctic or to the Polar Star near Antarctica, the U.S. Coast Guard is left without a self-rescue capability.

By contrast, Russia currently operates more than 40 icebreakers – several of which are nuclear powered.

The Coast Guard has been the sole provider of the nation’s polar icebreaking capability since 1965, and is seeking to increase its icebreaking fleet with six new Polar Security Cutters in order to ensure continued national presence and access to the Polar Regions.

“While we focus our efforts on creating a peaceful and collaborative environment in the Arctic, we’re also responding to the impacts of increased competition in this strategically important region,” said Adm. Karl Schultz, commandant of the U.S. Coast Guard. “Our continued presence will enable us to reinforce positive opportunities and mitigate negative consequences today and tomorrow.”