The first of a total of three lock gates for the new sea lock has arrived at IJmuiden Sunday (Jan20). The lock gate was towed by a tug across the North Sea to its final destination. On its way from South Korea to IJmuiden - with a stopover at Maasvlakte 2 - the lock gate has covered a total of more than 26,000 km. The transport over the last 150 km took 30 hours and went smoothly. 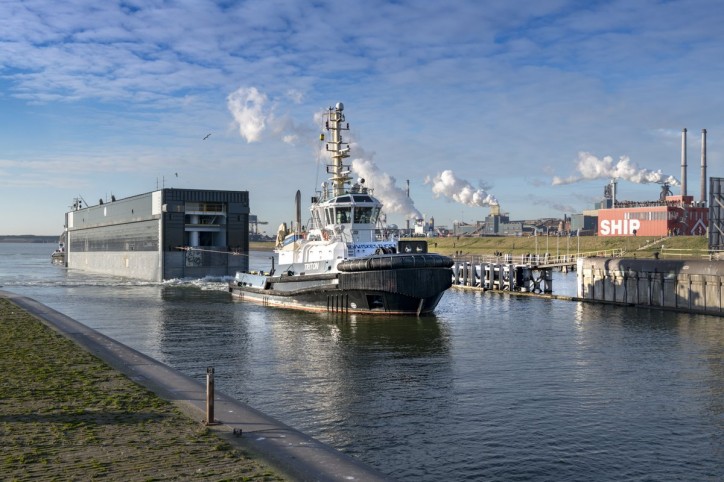 Minister of Infrastructure and Water Management, Cora van Nieuwenhuizen, is pleased with the arrival of the lock gate: 'It is good that - after a long journey - the first lock gate has now arrived at its destination. This is a milestone for this project and the start of a new chapter in the construction of the largest sea lock in the world’. The lock gate, which measures 72 metres long, 24 metres high and 11 metres wide, has been towed to IJmuiden. The closed construction of the lock gate can be compared to that of a ship. The lock gates have air chambers which enables them to float despite their weight of 3,000 tons. Ballast tanks filled with water provide the necessary stability.

The transport is very weather-dependent. Wave height, wind force and wind direction determine whether or not the transport can set sail. Apart from the weather, the transport also needs a high tide at IJmuiden to tow the deep-draughted lock gates through the IJmuiden North Lock. In the coming period, as soon as the weather permits, the other two lock gates will also be towed from Maasvlakte to IJmuiden.

All the technology necessary for the lock gates to function properly is manufactured in and will be installed in the Netherlands. This concerns the electrical and hydraulic installations such as the wheel carriages, the gate driving system and the technical spaces. One of the lock gates is to be completed in a dredged part of the future lock chamber of the new sea lock. The other two lock gates will be completed in the Western Port Area of Amsterdam.

The three lock gates arrived from South Korea in the Netherlands on 6 December 2018. At Maasvlakte 2, the gates were discharged from the transport ship Talisman, which was brought in a temporary submerged condition to enable the float-off operation of the gates. Then the gates were tilted 90 degrees to put them in a vertical position in the water. This was not possible in IJmuiden because of insufficient water depth there. Apart from that, the submerging and float-off operation of the three gates would also have completely blocked the fairway to and from the locks for a period of 24 hours.

To accommodate ever-larger seagoing vessels, OpenIJ has been working on the construction of the largest sea lock in the world at IJmuiden since 2016. The new lock will be 500 metres long, 70 metres wide and 18 metres deep. The project is a joint venture between the Ministry of Infrastructure and Water Management, the Province of North Holland, the Municipality of Amsterdam, Port of Amsterdam and the Municipality of Velsen. The OpenIJ consortium of contractors is building the new sea lock on behalf of the Directorate-General for Public Works and Water Management.